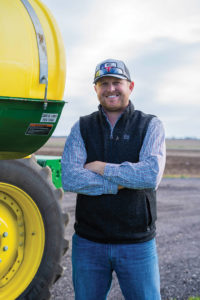 Todd Westerfeld is not new to the farming industry. He comes from a family farming tradition, including his father and grandfather before him, and uses knowledge gained over generations for his current production model.

Westerfeld, after working with his dad on their operation in Moody, Texas, since he was 8 years old, started farming his own acres in 2009 at the age of 22. Now 33, Todd and his father, Terry, plan to grow more than 1,000 acres of cotton this season. Alternating effective herbicide modes of action has proved essential for weed control in their cotton crop. The secret to insect control? “A good consultant,” Todd says.

Even while being at the forefront of technology, Todd says it is “everchanging.”

Weed control is an ongoing issue everywhere and is no different for the Westerfelds. A strategy Todd has adopted recently is using LeadOff herbicide as a burndown and residual, and then hammering the ground with more residuals in the spring.
“The easiest way to control herbicide-resistant weeds is to keep them from ever coming out of the ground,” he says.

Currently, Todd and Terry are switching from Deltapine to PhytoGen varieties to attack emerged weeds, such as Palmer amaranth, with a different mode of action — the Enlist weed control system.

“PhytoGen also fits with our practice of applying Topguard fungicide, which can slow germination,” Todd says. “Because PhytoGen varieties have a reputation for good emergence, we can increase our ability to get a consistent stand. The first two weeks after planting are the most important part of our growing season. Quick, consistent emergence and early season growth are key to a successful crop in the Blacklands of central Texas.”

In addition to fine-tuning their weed control strategy, the Westerfelds like to try new technology on their farms related to seedbed preparation, satellite imagery and planters.

Data management is a massive portion of Todd’s tactic for growing a successful cotton crop. He uses GPS tracking systems on his equipment and a yield monitor on his stripper to see where problems exist. He also constantly teaches himself how to make even better use of these tools as technologies progress. 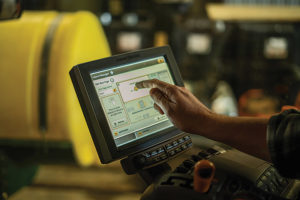 A John Deere 4600 CommandCenter monitor is mounted in Todd Westerfeld’s tractor. “It controls everything related to tractor performance, such as hydraulics, transmission and performance settings, all the way down to creature comforts like radio and climate control.”

During the growing season, cotton requires more attention and management to make timely decisions compared to other crops, such as corn. Todd says corn can often overcome issues that cotton cannot. Cotton needs more of his attention to achieve consistent emergence, growth, defoliation and harvesting.

“This year, we installed a Precision Planting CleanSweep system to move residue out of the seed furrow to help prevent late emergence,” he says. “We call them ‘trash kickers.’ So far, we have used the system in corn, and it seems to be a good investment. We also plan to use it in cotton to streamline emergence and scrape off some dirt if we need to reach more moisture for planting.”

Other technology, such as mapping data that provides section control on sprayers and planters that prevent overlap and excessive seed costs, also is important to the operation. Next year, he plans to add a Precision Planting DeltaForce system with individual-row downforce control to his planter to achieve proper seeding depth. He also is interested in equipment that samples and scans the soil for fertilizer needs. Todd says tools like these offer huge benefits to farmers in Texas, as well as farmers in general.

Advancements To A Fault

Unfortunately, all the technology in the world cannot make up for human error, bugs and glitches. “Even with the best, newest systems and most user-friendly updates, human error cannot be completely eliminated,” Todd says. 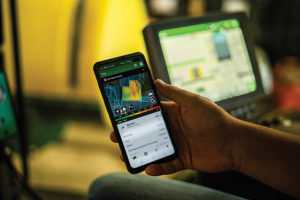 The John Deere MyOperations app shows tasks being done and where equipment is running in real time. It also shows variety changes, seeding rates and chemical applications. Knowing where changes occur when scouting fields allows Todd to see what works and what doesn’t.

Another challenge with planting tools, such as Flag the Technology, is that not everyone uses it.

“This makes it harder for farmers to know what trait technology other farmers in the area are using,” he says. “For this practice to work as intended, it needs to be mandatory, especially since good communication with neighbors is vital to prevent potential drift damage.”

Although today’s technologies are great, they’re always changing, Todd says. He takes time to learn about updates and watches the progress made with new tools. But as technology progresses at a fast pace, farmers may struggle to keep up with current standards and practices.

Over the past five to 10 years, agricultural technology has come a long way for the Westerfelds. They’ve adopted everything from yield monitors on stripper harvesters in conjunction with radio-frequency identification (RFID) tracking to more data management tools.

Looking to the future, Todd would like to see more improvements in RFID technology and yield monitor accuracy so farmers can zero in on issues and figure out solutions. This would allow better end-of-year analysis to see what bales performed better and where.

“The RFID tag has a serial number and is embedded in the round bale wrap,” Todd says. “The cotton stripper is able to coordinate the serial tag number with information such as the variety, the date, the field name — all the data points associated with that tag. One example of how RFID technology can help us is from a moisture standpoint.

“If we are running the stripper and get into some green cotton — 15% or higher moisture — software at the gin coordinated with the RFID tag could immediately pick up this information and red flag the bale. Then the gin would know to pick it up immediately and process it quickly to help avoid things like leaf spot on our grade. This technology is still in its infancy, but it will get there one day.”

With all the ag technology improvements and implementations, Todd says the one piece of advice he would give farmers is simple: patience. He says losing yield or grade is obviously not preferred, so patience with planting, spraying, defoliating and harvesting is crucial, even when faced with weather concerns.

“Don’t rush, step back and get it right,” Todd says. “Patience is key.”

Cassidy Nemec, a senior at Baylor University, is currently pursuing a degree in business and journalism.