EDITOR’S NOTE – Texas A&M agricultural economist Carl Anderson and Georgia Extension economist Don Shurley have observed the cotton market for many years and have seen plenty of volatility during that time. In this interview with Cotton Farming Editor Tommy Horton, they take a closer look at recent trends and discuss what might be ahead in 2013.

In looking at the 2012 cotton crop season, how would you describe it from an economic and marketing perspective? 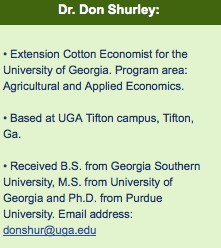 Shurley: Although price is very important, cost, yield and insurance are also important. In a single word, price has been “disappointing.” I think it’s fair to say that prices were expected to trend down but the earliness of the decline and magnitude of the decline, I think, was more than most anticipated. Some producers will benefit from very good yields and the much higher price on revenue coverage insurance, but lower prices still hurt.

Anderson: The unrealistic high cotton prices in early 2011 triggered economic forces of supply and demand to direct market prices lower for the 2012 cotton crop. That is, high prices earlier encouraged more cotton production worldwide than consumption could absorb at the high price level. The over 90-cent per pound cotton in early 2012 gave way to lower prices around 70 cents for the second half of the year.

Could anyone have anticipated such price volatility after cotton hit record highs a year ago?

Shurley: Sure. It wasn’t reasonable to think prices could maintain those levels and, in some respects, those very high prices made volatility even worse. Although due to more than just high prices, demand has essentially come to a s 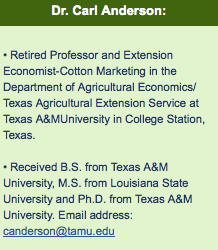 tandstill, and all segments of the industry are reeling from volatility and related financial losses. Not long ago, $1 cotton was considered almost unheard of. Now, we are disappointed at less than $1 cotton.

Anderson: Given historical price movements, a much lower price and a surplus supply were to be expected following a price surge a year earlier of more than $2 per pound. Producers who developed a marketing plan based on the likelihood of lower prices were rewarded with $50 to $100 more per-bale income than harvest-time prices allowed. In a volatile market and prospects for a record world carryover, the price dropped without much recovery along the way.

Shurley: When it comes to acreage decisions, the price of cotton is not as important as the price of cotton in relation to alternative crops such as corn and soybeans – and peanuts in my neck of the woods. U.S. acreage may be down 20 percent or more in 2013. That will result in somewhat higher prices. The market already anticipates less acreage, and we’re already seeing Dec 13 futures five cents above the 2012 crop. In my mind, demand is the key, not just acreage reduction. It could be the 2014 crop or later before supply and demand result in much higher prices.

Anderson: The cotton price is less than the production cost while grain prices are far above costs. Assume U.S. cotton producers slash acreage 40 percent below the 12.4 million acres planted in 2012 and plant more grain and soybeans. The U.S. cotton crop would be cut substantially. But, foreign acreage is not likely to be reduced half as much as in the United States. This still leaves a world surplus too great to expect more than sluggish prices for another season.

We’ve seen historical cotton price swings in the past. Is this just another cyclical change or is it something different?

Shurley: The only real change I see is that corn and/or soybean prices have remained relatively high since the 2007 crop year. Over the same time, cotton has been up and down between the 40s and 50s to over $1.50, and those really high price spikes didn’t last long. I see cotton possibly repeating the pattern of 2007 through 2010. Because of attractive corn and soybean prices, we cut U.S. acreage back 40 percent from the high in 2006. Cotton prices did not immediately respond because of high stocks and weakening demand. We will cut back acreage in 2013, but prices will not respond fully until stocks and demand are dealt with.

Anderson: Yes, historical price swings are likely to continue. It will probably take another 18 months to bring a balance between cotton supply and demand at a higher price above production costs. Increased polyester fiber use will compete vigorously with cotton fiber.

How should a producer approach 2013 in light of such price competition from grain crops?

Shurley: In annual “what to plant” decisions, you can’t automatically assume that grain crops are a perfect substitute for cotton or vice versa. Crop rotations always come into play as well as resources available, risks and management. There’s no doubt the market is signaling to plant less cotton and more corn and soybeans. That’s based on prices right now. However, if you don’t lock in those high prices and then prices decline during the growing season, you could end up looking back and wondering why you planted what you did. It’s possible that cotton could improve or trend up, and corn and soybeans trend down.

Have you seen anything resembling the price volatility for cotton in the last two years?

Shurley: If you take out the spike to $2.00 in 2011 and the quick spike to $1 in 2008, the market looks a lot less volatile – the point being neither of those was sustainable. Most agricultural prices seem more volatile these days perhaps due to the increasing global nature of markets and electronic trading.

Anderson: Recent increased price volatility for cotton reflects a basic re-structuring of the pricing system for cotton futures. The current futures trading environment is based on electronic trading with computers rather than the old system of “pit trading” by human trading specialists. The computer trading system has added substantial speed and new forces that influence futures price. Most of these indirect buying and selling forces driving the market are limited to less than several weeks. Supply and demand forces rule the market in the longer run.

Can corn and soybean prices continue to stay at such a high level?

Shurley: Probably not, but no one really knows. I believe ethanol is now the single largest use of corn. This has changed the whole dynamic of both the corn and soybean markets. It seems important for the cotton producer to remember that on the supply side, price is determined by what happens outside the Cotton Belt. Cotton states’ production of corn and soybeans is minor in the grand scheme of things and not impacted much by our acreage decisions.

How important will effective marketing be for individual producers and how can they spread their risks?

Shurley: I believe a large portion of the crop is sold through cooperatives or marketing associations perhaps with limited decision-making by the producer. But, for both the producer and pools, there is no silver bullet, no single strategy that guarantees high price. This is why marketing can be so frustrating. Because prices are so volatile, the approach has to be to set realistic price goals and take action when those goals can be achieved. What is a realistic average price goal for 2013? 80 cents? 90 cents? 75 cents? The optimum approach is to spread risk by pricing portions of the crop at three or four or more times during the year rather than thinking you can pick the top and make one big “bang” decision. But even this approach can be frustrating if you price too low and the market goes up later. Using options or minimum price contracts can help in this regard. I also believe having revenue insurance rather than yield insurance can play a role.

Anderson: Effective marketing plans will be necessary to survive with a comfortable income level. A “year-round” marketing program is essential to managing your pricing risk and to gain financial rewards from fast and volatile price movements. Evaluate your pricing alternatives and perhaps use several different pricing strategies to spread price risk over time. Try to price during price rallies and do not wait for market peaks.