2017 Cotton Consultant of the Year is Paul Pilsner 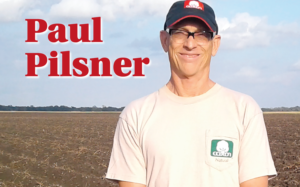 “My ancestors were early settlers of south-central Texas so ag is part of my DNA,” says Texas cotton consultant Paul Pilsner. “As a child, I remember watching my grandparents hand pick cotton on their small DeWitt County farm.

“My dad was blessed with a position at Union Carbide, which allowed our family to live an iconic 1960s’ lifestyle in Victoria. My brother and I were told we could be anything we wanted to be.My mother was a gardener so I enjoyed growing things.

“During college, I started a lawn maintenance/landscaping firm, which took me to the Rio Grande Valley to grow palm trees. In the late 1970s, I expanded my nursery business to include palm trees and citrus, and then lost everything to historic freezes in 1983 and 1987. As it turned out, these losses were a blessing disguised as devastation.

“Pat Kornegay, who was my neighbor and a crop duster, told me I should become a cotton consultant. He put me in touch with John Norman, who was the Extension entomologist for the Rio Grande Valley. I trained under John in 1987, and then starting checking cotton independently the next year. 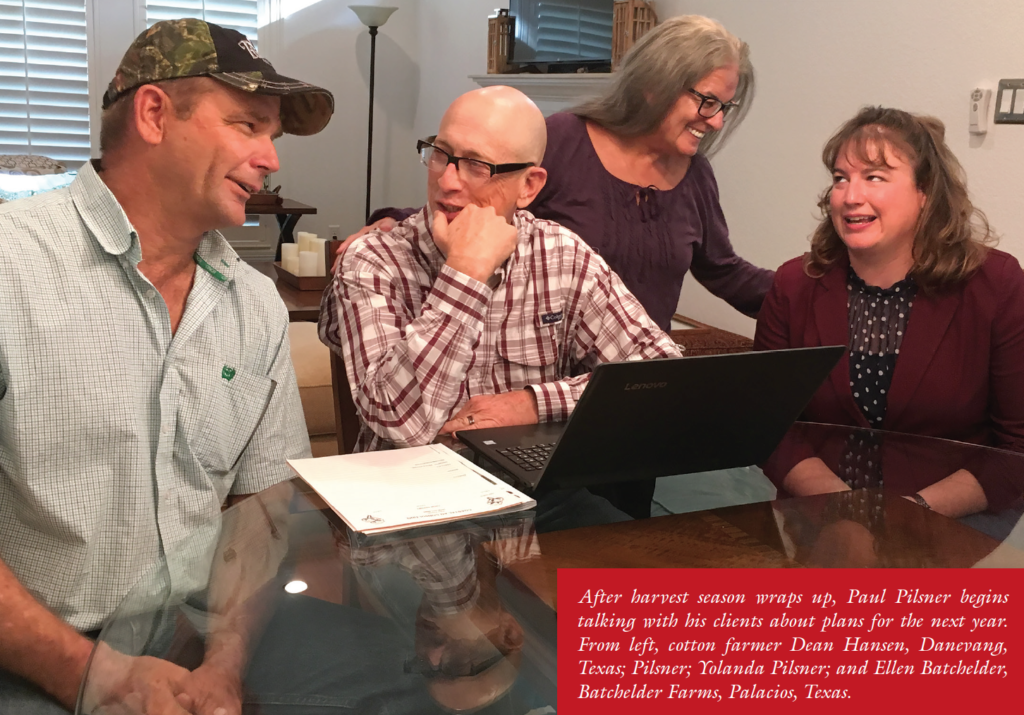 “At the time, consultants were called bugmen because boll weevils and bollworms were such a nuisance. We made 10-plus insecticide applications per season and were typically held to a 1,000 pounds-per-acre yield cap. We were chasing our tails. Bt technology and herbicide-resistant cotton has changed everything.”

Although it appeared Pilsner was on his way to establishing himself in Texas, a drought in 1990 took him in another direction. He moved to Belle Mina, Alabama, where he worked with cotton consultant Billy Webster. Pilsner soon returned to Texas where he ran the cotton division of Coastal Ag Consulting with David Wilde and Glenn Crane from 1991-2006. He started Pilsner Consulting in 2007.
Today, he consults on cotton, grain sorghum and soybeans primarily in Matagorda, Wharton and Fort Bend counties. 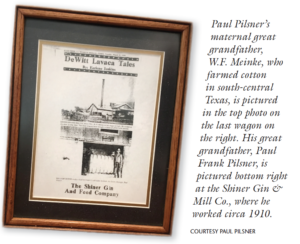 “For the past few years, I have scaled back to about 15 clients, and most of them have been with me from 15 to 25 years,” Pilsner says. “My philosophy is to treat these farms as if they were mine, and my goal is profitability.

“Even when times were tough, my farmers kept growing cotton. They’ve never lost their touch. For example, Dean Hansen has farmed cotton every year and says he will stay with it as long as he can. And so far, we’ve been able to help our clients make money on cotton.

“I can’t understate the importance of how blessed we have been to work with this group of farmers. Starting out, I made my share of mistakes, but they’ve stayed with me. We continue to learn and fine-tune techniques to achieve the highest return on investment.”

And Pilsner’s farmers think just as highly of him. For example, Gerry Batchelder of Batchelder Farms says she was impressed with Pilsner when she and her husband hired him as their consultant 19 years ago. Batchelder was in a position to judge his work accurately as she had completed a pilot program as a cotton scout with the Extension service in 1976.

“Through the years, I have walked many cotton fields as a cotton scout, a scout supervisor in several counties and an independent scout for area producers,” Batchelder says. “More than 20 years’ experience allowed me to make the decision on the accuracy and thoroughness of Paul’s reports.

“The first year he checked our cotton, I went behind him to compare my findings to his. His reports were very close to mine. As the year progressed, I became comfortable with Paul and his expertise. I trust him with our cotton and feel fortunate to have such a conscientious, hardworking and caring person as our consultant. I am proud to call him my friend.”

On the upper coast of Texas, Pilsner says 90 percent of his acres are dryland.

“I always point out that we get about 40 inches of rain a year in this area — 20 inches at planting and 20 inches at harvest,” he says. “I am exaggerating, but not by much. This is supposedly one of the most profitable dryland or rain-fed areas in the United States to grow cotton. In 2002, we had many large fields that yielded 4 bales per acre on dryland. And each year we have pockets that yield like this because of the new varieties that do so well.”

Pilsner says several of his farmers are willing to help him with plot work, which allows them to see the newest cotton varieties and chemicals before they are available to the general market.

“This enables careful evaluation of adaptability and viability in our region,” he says. “For example, last year one variety was pushed hard for yield and quality even though my research showed it was too full season for us and not consistent in dryland conditions. My recommendation was for faster, more drought-tolerate varieties. As it turned out, Hurricane Harvey destroyed the later-maturing varieties while many of the faster-maturing, early varieties were harvested before Harvey hit and brought premium quality.”
During the growing season, Pilsner keeps in touch with other consultants as well as industry and Extension personnel across the Cotton Belt.

“As consultants, we are not competitive,” he says. “We always reach out to one another to try to come up with answers. I also work with a tight-knit group of industry people to find the best solutions for farmers. And if Extension personnel need to find fields with bad insects or weeds, we help them locate those, too.”

The Texas consultant has earned respect not only among his farmers but also among his peers.

Lee Hutchins, Crop Management Inc., Sinton, Texas, says, “I will come straight to the point. Paul is very knowledgeable in the cotton business and has done this for many years. He is a top-notch cotton consultant. As a fellow consultant, I visit with Paul many times during the crop year. When I run into a tough situation, I don’t hesitate to call him. Paul has helped me out at times when he was at his busiest, and he doesn’t live next door.”

Hunter Wilde, a partner in Anaqua Farms in the Rio Grande Valley, remembers the time a new insect came into the area. He had no idea what it was.

“Paul helped me identify and effectively control these pests, which saved our cotton crop,” Wilde says. “If he hadn’t been there to help, we would have lost it all. Most of what I know about cotton farming, I learned from Paul Pilsner.”

Ellen, Jeanette and Wesley Batchelder have always said this about Pilsner: “Paul is not only our consultant during the cotton season, he is our consultant all year long. We are blessed to have the Pilsners as our family friends.”

When asked his reaction upon learning he was selected as the 2017 Cotton Consultant of the Year, Pilsner says he was surprised.

“My Syngenta rep, Tony Driver, called last fall, and I thought he was going to tell me about an upcoming meeting,” he says. “When he gave me the news about the award, it was an honor to know the guys I’ve always considered icons of the industry had voted for me. I am humbled to say the least.”