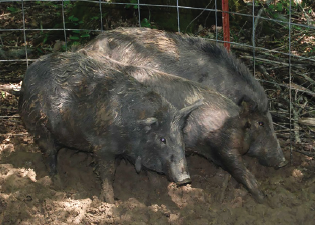 Clemson wildlife conservation specialists are helping the U.S. Army Corps of Engineers control feral hogs, such as these, at Fort Hood, Texas.

Greg Yarrow, professor and chair of Clemson’s department of forestry and environmental conservation, studied feral hogs’ diets in Texas as a graduate student and was approached about collaborating on the research at Fort Hood.

“One of the intermediate steps before you can really get into an effective animal control program is understanding what those critters are depending on in terms of food habits at different times of the year,” says Darrell Evans, research wildlife biologist at the U.S. Army Engineer Research and Development Center-Environmental Laboratory in Vicksburg, Mississippi.

Evans knew of Yarrow’s previous research. “Greg is one of the best-suited people in the country to help us with diet analysis of feral hogs,” he says. “The work that Clemson is providing will tell us on a gross scale what the hogs are selecting for food on a seasonal basis.”

Hog Diets And Habitats
Clemson is working with the ERDC-EL on two projects at Fort Hood, the largest military installation in the world by area with more than 215,000 acres. First, researchers will identify what the feral pigs are eating across the calendar year and how their seasonal diet varies. Next, they will analyze the pigs’ locations and habitats as they roam the installation through data collected via GPS tracking.

“The pigs are omnivores, so they are opportunistic in what they eat,” says Clemson assistant professor of wildlife ecology David Jachowski, who is leading efforts conducted by Clemson. “Right now, we are looking at the stomach contents after they are rinsed and run through screens to pick out the larger material, and we’re categorizing it as plant, animal, other and so on.”

Data analyzed by Clemson researchers will be compared with maps that detail various habitats on the installation to identify where particular food types occur, allowing animal damage control teams to concentrate their efforts into specific areas. The second phase of the project — analysis of the GPS tracking data — started in February and is expected to be finished by June.

Task Force Efforts
While Jachowski is collaborating with ERDC-EL on their research efforts at Fort Hood, Clemson also has been instrumental in helping South Carolina stakeholders combat the rising impacts of feral hogs in its home state.

“Several of us are working on this issue,” Jachowski says. “Dr. Yarrow has played a particularly large role with the South Carolina Wild Hog Task Force, and Clemson Extension has a big role with that task force as well. While Dr. Shari Rodriguez is not specifically working on this project, she works on feral pig issues in South Carolina, particularly related to private landowners and agricultural crop loss.”

Rodriguez, assistant professor of human dimensions of wildlife, surveyed 2,500 farmers and members of the South Carolina Farm Bureau to help understand their perceptions of wild hogs and the cost of damage caused by the invasive pigs.

Her 2016 report estimated $44 million in damage to crops, livestock and timber across the state, while landowners reported another $71 million in non-crop losses from damage to wildlife food plots, streams, ponds, wetlands, equipment, unpaved roads, fire lanes and landscaping.

South Carolina has experienced a dramatic increase in the distribution and abundance of wild hogs, causing a significant rise in economic and environmental damage that warrants control. Beyond alligators in the lower part of the state, humans are the only native predators of adult wild hogs.

“The task force meets a couple times a year for updates and hold workshops across the state,” Yarrow says. We also provide management information for landowners and conduct research.”

Through their collaborations with ERDC-EL, Clemson now has the potential to engage in future research efforts with the Army. This provides a unique opportunity for the university to provide its expertise and collaborate on larger-scale research projects that benefit the nation.