• By David Wright,
University of Florida • 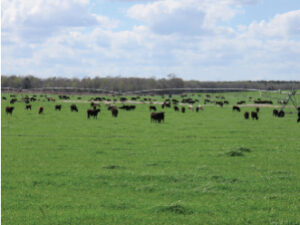 Many crop producers in the Florida Panhandle use conservation tillage when planting into winter fallow weeds or cover crops.

The University of Florida/Institute of Food and Agricultural Sciences research data over the years shows that cover crops can help prevent erosion and conserve moisture but may not always increase yields.

However, data from the past 20 years of a long-term cotton/peanut rotation shows that if winter cover crops are grazed, fields that often have had break-even yields can be converted into some of the top-yielding ones. Also, less nitrogen, potassium and other nutrients are being used.

In addition, research has proven that 40% to 70% less irrigation is needed, depending on the year, following winter grazing. This is due to enhanced (almost double) rooting of cotton and other crops in experiment station trials.

In 2019, many areas of the Florida Panhandle had 70-plus days without rain between early August and mid-October. Nothing but irrigation or rain can help crops in a case this extreme.

However, the doubled root system following grazing allows you to go about twice as long without irrigation. This practice is beginning to be recognized by many of our crop producers across the Florida Panhandle.

Cattle producers teaming up with row croppers are making this a mutually beneficial enterprise. We have emphasized to growers to start with their worst fields; and for years, every farmer who has tried it has come back with positive stories.

When trying this practice in a non-irrigated portion of a field, we have seen it take three to four weeks for the crop seed to germinate due to dry soils. On the other hand, the crop in the irrigated portion may be 6-8 inches tall if the cattle were removed in mid-April. That will probably make you wonder if you made a mistake.

However, be assured that right after the first rain, it will germinate. And after the first month, the grazed portion will be a similar height and eventually end up being more robust.

So be patient with the cattle/row crop systems and know that winter grazing cattle has brought about big improvements in soil health. This will translate into big benefits to the ensuing crop.

Make Use Of Funding

The benefits of the integrated row crop-livestock system are also being recognized by conservation agencies. For example, the U.S. Department of Agriculture’s Natural Resource Conservation Service is helping growers get started on these practices through the Environmental Quality Incentives Program funds and other conservation programs.

Grazing takes most of the cover crop out but results in higher yields with lower input costs. This gives farmers an incentive to plant cover crops, which they would otherwise avoid because of the expense and lack of return in yield in many cases.
Likewise, calf gains have been 50-100 pounds per head higher following row crops, as these fields are usually higher in fertility than typical pastures.

I have heard many testimonials about ways cattle and row crop producers are working together to make the system profitable for both parties, while also contributing to soil health and other environmental services.

During times of low prices for both crops and livestock, it is advisable to take a closer look at the least productive fields and practices on your farm and strive to do something new to increase productivity.

Consider taking a shot at using an integrated cropping/grazing system in those fields. You don’t even have to own or manage the cattle if you can make an agreement with a local rancher.