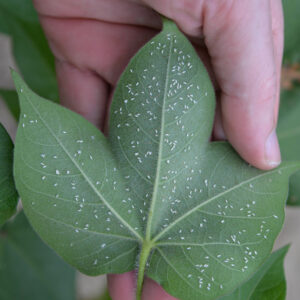 An important economic pest in cotton is not something producers want to see in their fields at any time, especially not earlier than expected. However, that has been the case this season.

Silverleaf whitefly infestations are much earlier than normal and are likely a result of increased winter survival due to the lack of cold temperatures, says University of Georgia Extension entomologist Phillip Roberts.

“They are being observed in areas that have historically had infestations. A few localized fields have exceeded threshold and been treated. Management of SLWF should be a priority. It is important to you know if SLWF are present in your area, and when present, it must be a part of every decision you make.”

What To Look For

Ron Smith, Auburn University Extension entomologist, says the first sign of an SLWF infestation will be the presence of whiteflies clustering around the plant terminal or underneath the terminal leaves; adults fly when disturbed.

“Population increases will be observed about two weeks after the first presence of adults. Eggs are deposited underneath the leaves and hatch into a crawler stage to begin feeding. The immature stage is then immobile until it develops into an adult. The total life cycle of the SLWF is 15 to 18 days, depending on the temperature.”

SLWF feeding stunts plants and reduces vigor. The more serious problem is their secretion of honeydew, which falls in lower parts of the plant.

“As the plants mature, this secretion falls onto open bolls,” Smith says. “A sooty mold grows in this honeydew, which reduces lint quality.”

Heavy SLWF infestations can cause premature defoliation, and populations will continue to increase until cotton is defoliated.

Stay On Top Of Scouting

In Tift and Colquitt counties, Georgia, SLWF adults were observed on young cotton in late June. University of Georgia post-doctoral entomology researcher Apurba Barman says, “It concerns me when I see adults feeding on young, topmost leaves of cotton plants because this is an indication that whitefly population is not just randomly flying, but they are on the verge of colonizing in that field and eventually numbers will increase.”

As with most insects, not all fields will be equally infested by SLWF at the same time. Scouting is the only way to know when populations are increasing and a threshold has been reached.

Smith says, “Treatment decisions for SLWF can be made by examining the presence or absence of immatures on the fifth main stem leaf below the terminal. Controls are recommended when 50% of the plants have three to five immatures on the lower surface of this leaf. Immatures will appear oval, flattened and yellowish in color. They can be separated from aphids by their flattened shape and the absence of appendages and movement.”

Roberts says conservation of beneficial insects is also a must. “Only spray insecticides for other pests based on the use of scouting and thresholds. When treating other insect pests, avoid insecticides prone to flare SLWF.”

Once the population is out of control, it is difficult and expensive to manage, Barman says. “Plan accordingly based on the crop conditions. Consider timely insecticide applications following Extension recommendations and scout data.”

For more information, see “Sampling And Managing Whiteflies in Georgia Cotton” by Apurba Barman, Michael Toews and Phillip Roberts. It can be found at https://bit.ly/3aSCiQj.