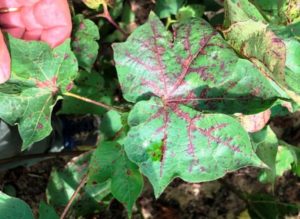 The list of weeds found to be overwintering hosts for cotton leafroll dwarf virus continues to increase based on research findings. Both weeds and cotton stalks left in the field can act as a green bridge over the winter and a well of inoculum for the onset of disease the next season.

Despite the growing data on CLRDV, it has been a significant problem in very few fields.

University of Georgia Extension plant pathologist Bob Kemerait says, “In my estimation, in 2020, CLRDV was present in a small amount in nearly every field in Georgia. How many fields was it a significant problem in last year? I think it was only three or four fields where yield was affected.

“I can’t tell you why it was severe in the one field and not in the field across the road. When a disease is capable of causing significant loss but this randomness cannot be explained, it does cause concern and shows that more research is needed.”

Extensive surveys in cotton-growing areas have helped identify weeds that harbor CLRDV over the winter. Both weeds and cotton stalks left in the field may be a primary inoculum source for the onset of disease in the next growing season.
‘Foliage samples from 57 different weed species were collected from fields formerly planted to cotton and analyzed with CLRDV-specific primers.

The virus was detected in 23 weed species belonging to 16 different botanical families. For cotton residue, overwintering cotton stalks and regrowth leaves harbored CLRDV at 48% and 75%, respectively.

“In 2021, we still see lots of fields with cotton stalks. The presence of CLRDV-positive stalks in the field after the cropping season shows the residual cotton stand to be a suitable reservoir and overwintering host for the virus. Adoption of proper chemical rotation and integration of the cultural practices such as the use of cover crops, trap crops, crop rotation and elimination of weed escapes could help manage weeds as well as reduce the reservoirs of the virus.”

Besides field sanitation, the other recommendation for producers regarding CLDRV going into 2021 is to avoid planting cotton in late June.

“Late-planted cotton seems to have more significant problems with CLRDV than does early planted cotton or that which is planted during the optimum window. But even that’s not consistent,” Kemerait says.

Symptoms for CLRDV may vary based on crop age; however, one of the difficulties with this disease is the variability in virus expression.

“Early or young plants exhibit drooping and wilting and often may not recover. If it does recover, it will not yield. Leaf curl or crumpling is the most common symptom. We have also seen areas of explosive growth where a section of the plant will grow very tall but have no bolls.”

Other symptoms include reddening or a bronze look to the leaf, internodal shortening, intense dark green foliage and moderate to severe stunting.

“We are also conducting experiments to understand the role of weeds on virus epidemiology and incorporate them into our disease management strategies.”