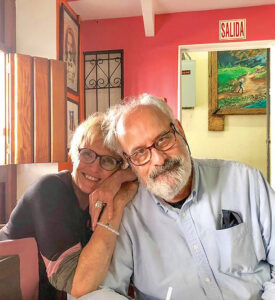 Debra Ferguson and her husband, Owen Taylor, were ag journalists known for their reporting via the digital platform, AgFax. Debra was also a talented photographer whose work appeared in numerous
publications over a span of decades.

I didn’t follow a traditional path to become a crop consultant. I did not work summers scouting fields for well-known consultants and knew few farmers when I started.

My father was an ag-chemical salesman, so I had plenty of exposure to the world of agriculture. I found I loved the science side more than the sales side — a consequence of going on complaint calls with my dad, I suppose.

Although I cannot recall the exact date, I remember my father buying a fax machine in the late ’80s or early ’90s. As it was used for business purposes, I was not allowed to go near the machine that took up half a desk and even had its own phone number.

However, as most 11- or 12-year-old boys do, I perused the faxes as they came through and thereupon was reading reports from consultants via AgFax. Names I heard my father speak of were quoted in discussions about battling tobacco budworms, documenting egg counts, and boll weevil battles won and lost.

Cotton crops were described as “burnt up” or “couldn’t look better.” Even then, you could read about the worst fruit sheds consultants had ever encountered.

I was soon addicted to reading about the details of cotton production from the consultant’s perspective. Reading these reports was my first exposure to the profession that I later chose.

As I started my consulting career and the “fax” shifted to a digital format, I weekly (and still do) compared my findings to my esteemed colleagues in other regions. There was comfort in knowing others were in the same mess, jealousy for those whom the hurricanes missed and sympathy for those who had it worse.

I have always considered AgFax to be the sacred “Journal of Cotton Crop Consulting,” as it served a vital role in documenting the scouting and control measures of crop consultants around the United States.

One spring day prior to 2010, I ignored a phone call from a Mississippi number and let it go to voice mail. Upon listening, I heard, “Ah, Hank, this is Owen Taylor from AgFax. I interview crop consultants and get crop reports. I got your number from Roger Carter who said you would be a good person to contact. If you want, please call me back.”

I am not sure when I came back to reality, but I felt like a celebrity had called me. Like a minor leaguer called to play ball in the majors, I composed myself and returned Owen’s call.

“This is Owen Taylor.”

“Mr. Owen, this is Hank Jones, you left a voicemail.”

Not often does someone complete an initial phone call knowing you met a good friend, but I did that day. He spoke with a genuine quality and valued what I was telling him.

After 20 years, I often fear for my life providing farmers’ consulting reports, but it was enjoyable sharing with Owen the gory details of tarnished plant bug migrations and reports of bollworms slipping through Bt technologies. I think all who he called on for reports felt this same sincerity from Mr. Owen, and there was a shared respect for our respective work.

Like anyone who knew them, I found Mr. Owen and Mrs. Debra to be two of my favorite people to talk with. He’d start our conversations with “Tell me about your cotton.” 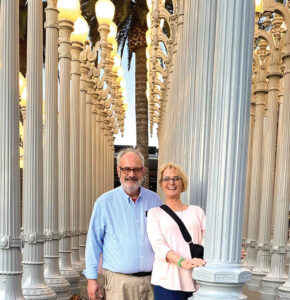 Debra Ferguson and her husband, Owen Taylor, capture a
moment during a recent cross-country trip.

After he had recorded what I said, there would be a short pause and he would ask about my family, TV shows I was binge watching, and mom and pop restaurants in North Louisiana. We would tell old stories and use slang terms only found in the Delta lexicon. He ALWAYS was more interested in talking shop than talking crops.

I threw him a curveball in 2010 when he asked about my family and how well we overwintered. I was proud to inform him my son was born that January. And upon being asked his name, I announced “Owen Taylor Jones.” After a 10-second pause, Mr. Owen said, “That’s a real good name.”

After a good laugh, I told him Owen and Taylor were both family names, but I gave him allowances to claim my son was named after him. He never called again without asking about his namesake.

Ever the social media savant, Mr. Owen discovered through my Twitter account that I had performed on stage in one of his favorite productions. The next year, he and Mrs. Debra came — as they said they would — to a production that required me to look like a deranged lunatic.

He raved poetically about the need for arts and culture in the Delta and was very impressed with our small-town production. They even joined the mailing list to keep up with future productions.

My experiences with Mr. Patrick Shepard mimicked those with Mr. Owen. Mr. Patrick would ask me about the crops, and then we would get down to business, talking about shared musical interests and good restaurants. He was always so courteous and wanted me to know how much he valued visiting with me when he called.

I will add that he was quite upset when he found out I went to Memphis to see Bob Seger and the Silver Bullet Band and did not invite him. He and I shared a respect for Mr. Ray Young, and he honored me by inviting me to Mr. Young’s Southern Cotton Ginner’s Hall of Fame induction. Mr. Patrick always told me he was proud to see a younger generation step up and become consultants.

Mr. Owen, Mrs. Debra and Mr. Patrick, like many others in the ag journalism profession, identified us as friends first, then as consultants. They understood the grind we face in the summer, respected our time and valued our input.

I finally met Mr. Owen and Mrs. Debra in person after seven or eight years of being phone interviewed. Prior to that day, I told him he was “my best friend I had never met in person.” I still had the same star-stuck feeling meeting them as I did when he first called me.

I speak for many when I write this: It is difficult to accept these great friends of ours unexpectedly left us last year. We didn’t lose great reporters; we lost our friends. We will always remember the last thing they said, “Let me know if I can help you in any way.”

I hate that I never told Mr. Owen how much his newsletter impacted me at an early age. I hate I never saw a concert with Mr. Patrick. I hate I never got to see Mrs. Debra fly her drones over the many fields I told her about. Most of all, I’ll hate not getting a phone call from my dear friends and telling them about overwintering and how much cotton acreage increased or declined.

2020 has dealt many of us a full measure of heartache and grief. The sadness and void we feel remembering Mr. Owen, Mrs. Debra and Mr. Patrick can only be matched by remembering the authentic qualities they exemplified.

It would be negligent of me to not mention how thankful I am to all the journalists and reporters I’ve had the pleasure of working with over the years.

Mrs. Carroll Smith, Mr. Forrest Laws, Mr. Ron Smith and Mrs. Doreen Muzzi have all been great people to help out. We are lucky to have each of you continuing to tell our stories as the scribes of Mid-South agriculture.

Hank Jones is an independent crop consultant and owner of RHJ Ag Services in Winnsboro, Louisiana.