With conservation deep seeded in his roots, Walter Lentz is a firm believer in cover crops and reduced tillage to help minimize erosion and keep the soil on his fields.

“Cover crops are somewhat of a necessity, but hey, it’s also the right thing to do,” says Lentz, who farms sloping and rolling fields, many of which have highly erodible soils, near Sumner, Ga. “It’s a constant fight to keep this part of the world from flowing into the Withlacoochee River. 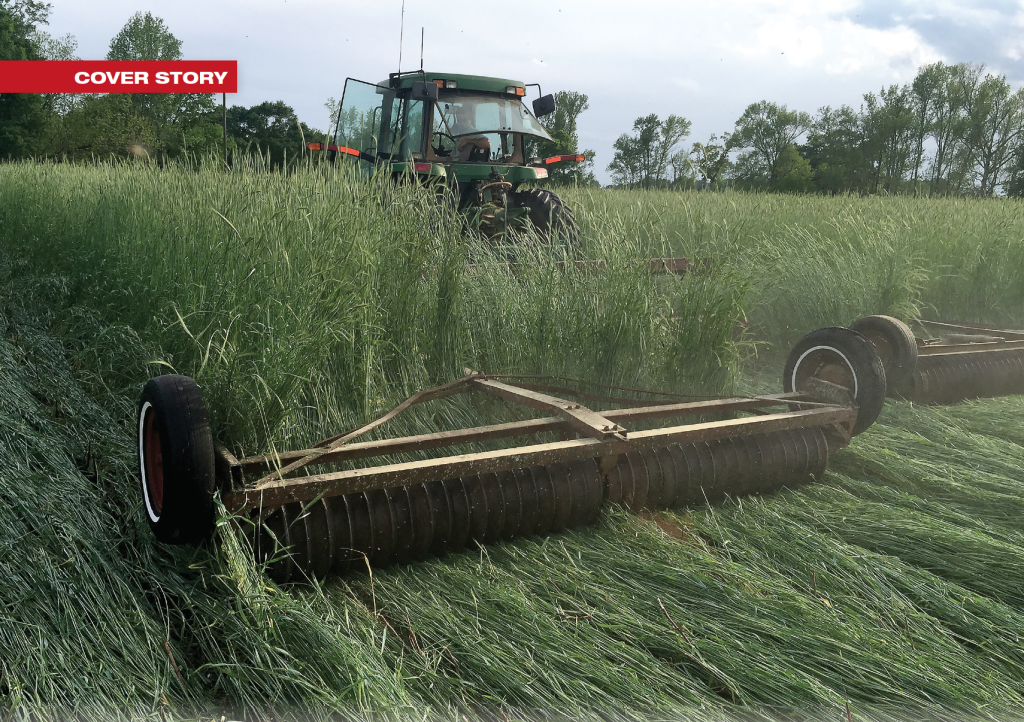 When this farm was purchased, it had been neglected. Conservation tillage is something that where I farm you’ve got to do — it’s just a no brainer.”

Even on his fields with less erodible soils, Lentz plants a cover crop. But he isn’t the only producer following cotton or peanuts with a winter cover.

Although no hard figures are available, the general consensus among Georgia’s Extension specialists is about 20 percent of acreage is under conservation tillage combined with a winter cover crop, says Dr. Glen Harris, a University of Georgia professor of crop and soil sciences and Extension agronomist based in Tifton. That includes producers who let winter weeds grow and burn them down just before planting as well as producers who plant a cover crop.

“We plant over 1 million acres of cotton in Georgia, so 20 percent is still a lot,” Harris says. “Probably one of the reasons why conservation tillage and cover crops aren’t higher than 20 percent is it’s really hard to show growers a dollar value or this is what it’s going to help you make. But cover crops do a lot in terms of nutrition and water-holding capacity.”

A Family Tradition Of Conservation

Lentz came into farming by way of the timber industry. Both he and his father oversaw timber production, wildlife management and conservation on a large Georgia timber preserve. Lentz left that industry about five years ago and began farming in 2012 with partners Tommy and Tim Sumner of T&T Sumner Farms.

“Conservation was always something big in my background in timber,” Lentz says.

His typical rotation involves two years of cotton followed by a year of peanuts.
Shortly after cotton harvest in October or early November, he broadcasts 1 ½ to 2 bushels of wheat seed onto the soil, then comes back with a drag to cover the seed.

A single irrigation from one of his center-pivots starts the crop off, and he relies on natural rain for the remaining moisture. No fertilizer is applied since he doesn’t intend to harvest the grain.

The wheat typically reaches about 10-15 inches tall before he burns it down with a tankmix of glyphosate and 2,4-D about two weeks before planting cotton in May.

“We’re trying to keep that cover crop as long as possible,” Lentz says.

He applies a second burn down, typically Gramoxone and Prowl, just ahead of planting to pick up any wheat missed the first time or plants that have regreened since the first application. He then no-tills right through the plant residue.

Peanuts are a bit more challenging, since that crop is planted on beds and requires smoother soil conditions.

With peanuts, Lentz burns down the cover a few weeks earlier, allowing it to degrade a bit longer in the field before bedding up. Nevertheless, he says the increased vegetation does slow the bedding process.
Shortly before peanut harvest, Lentz broadcasts the wheat cover seed. The actual peanut harvest helps disperse the seed.

Lentz has hosted Agronomic Performance Trials, formerly called Cotton Agronomic Performance or CAP trials, on his farm the past several years. He has seen firsthand how the different varieties perform on his operation. Conducted by Bayer throughout the Cotton Belt, the performance trials are designed to give growers, consultants and researchers insight into how varieties — including those of competitors — perform under local conditions.

The past two years, Lentz has planted mostly Stoneville ST 5115GLT and ST 6182GLT because of their consistently high yields and strong gin turn-out.

Although both varieties Lentz plants have average-sized seed, he describes them as “work horses.”

“Once you get (ST 6182GLT) up and going, it does really, really, really well,” he says.
Lentz and Michael Brooks, manager of Omega Farm Supply and Gin Co. in Omega, Ga., say they’ve noticed several benefits from the cover including improved yields.

“The first year we had this place, you would water and see the water run off,” he says. “Now you can see it soak in. It’s a big difference.”

Kevin Tabb, who farms near Damascus, Ga., has taken a slightly different approach. He planted his first wheat cover crop during the 2015-16 winter on selected fields as part of a Natural Resources Conservation Service program.
About three weeks before planting cotton, he burns down the cover crop with a tankmix of 1 quart glyphosate and 20 ounces of 2,4-D amine. A second burndown typically of Gramoxone and possibly more glyphosate is applied just before planting.

Tabb runs a strip-till rig consisting of a 10-inch shank with coulters on each side down the middle of 36-inch beds and plants right behind.

The addition of a wheat crop in the winter also means little down time for the Damascus producer.

“Usually we get off work about November and do nothing but disk land,” Tabb says. “This is just like planting again — it never ends.”

Because this is his first cotton crop following the cover, he says he doesn’t yet know the effects on his cotton, corn or peanuts that are part of his three-year rotation. Tabb is locked into the NRCS Conservation Stewardship Program for five years and says he plans to reevaluate cover crops after that.

Most Georgia producers who plant a cover use either rye or wheat, depending on their production system, seed availability and seed price, says Dr. Glen Harris, a University of Georgia professor of crop and soil sciences and Extension agronomist based in Tifton. Drilling the grain can be time consuming, so some growers have taken to broadcasting seed, followed by light tillage.

To get the most biomass from a cover crop, Harris says growers need to have it in the ground by October or early November and let it grow until at least March. They then kill the cover a few weeks before planting using either herbicides or mechanical means, such as rolling.

In the Tifton area, soils average 0.5 to 1 percent organic matter, which is very low.

“We can lime them and fertilize them, but one of the things we could do and don’t do enough of is increasing the organic matter,” Harris says. “Anything we can do to increase the organic matter in our soils is going to be a good thing in the long run.”

Dr. Stanley Culpepper, a UGA professor and Extension agronomist, for several years has been studying high-biomass cover crops, such as rye, as part of an overall integrated weed-management program to help control Palmer amaranth.

The goal is to produce a dense, nearly season-long mat of plant material to block light that Palmer amaranth needs for germination and growth. But the dense cover isn’t a cure-all as it does little to suppress nutsedge, which can germinate without light.

He has focused on rye because of its rapid growth during the winter and high biomass potential. Although wheat doesn’t produce nearly the residual matter, Culpepper says the grain still has benefits.

“I’m not suggesting that rye is the only way to go – it’s my ultimate goal, my dream so far because it is easy to grow and produces massive levels of residue,” he says. “But most people just can’t go that way when they begin as it often takes a couple of years to figure out how to manage those high levels of biomass. Remember every bag of cotton seed is very expensive, and we must get a perfect stand, which means equipment modifications may be needed. My goal is to take conventional growers and over time help them understand the benefits (of cover crops) and adopt more sustainable systems.”

And the choice of cover crops ultimately rests with producers and what best fits their operations.