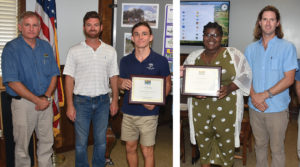 The awards, given to full-time and part-time student workers, were recommended by faculty at the research stations. They are sponsored by the Hardwick family, which grows cotton, corn, grain sorghum, soybeans and wheat on Somerset Plantation in Tensas Parish.

The three recipients are Sydney Cephus, Acey Hendrix and Valerian Johnson. Each received $500 and a plaque.
Cephus graduated from Davidson High School in St. Joseph, Louisiana, and is currently a sophomore majoring in physical education at Alcorn State University.

She has worked in the agronomic research program at the AgCenter Northeast Research Station for about four years. She is described as polite, punctual, attentive to instructions and inquisitive.

“She can be depended on to carry out her job assignments in a very conscientious manner,” says Melissa Cater, director of the AgCenter Northeast Region.

Hendrix attends Tensas Academy, where he is a senior. He joined the weed science program as a summer worker at the Northeast Research Station in 2019. Cater says Hendrix is an outstanding first-year student worker who performed his duties well and was eager to learn.

“He carried out a variety of tasks in the field and in the lab,” Cater says. “He learned tasks quickly and asked questions so he could better understand the job.”

Johnson, currently a freshman at Alcorn State University, has been employed in the cover crop agronomy program at the Northeast Research Station since June 2016.

“Valerian has demonstrated an excellent work ethic, is detail oriented and cares about her job performance,” Cater says. “She is described as respectful, dependable and trustworthy.”

Cater says the awards will be given annually.

Johnny Morgan is a communications specialist with the LSU AgCenter.