Where Are We Now On Tractor Incentive Funding? 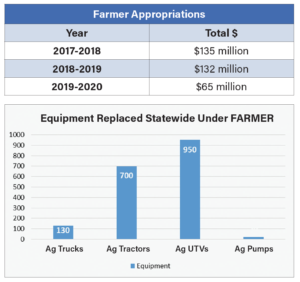 In 2018, the state began spending greenhouse gas reduction fund money from the Cap and Trade Program on the Funding Agricultural Replacement Measures for Emission Reductions Program.

The FARMER Program was designed to mirror the state’s existing Carl Moyer Program but expanded upon it with considerably more funding. The first three years provided more than $332 million statewide. Unfortunately, it has diminished each year. The first year included $135 million in incentive funds, while Fiscal Year 2019/20 has $65 million.

This is especially worrisome for the San Joaquin Valley, where the state implementation plan relies on 12,000 tractors being replaced by 2023 based on a full allocation of the program’s funding. Achieving that goal is now in serious jeopardy as the state has lowered the FARMER funding.

This funding has primarily been used to fund tractor replacement. It also has been used to replace agricultural utility terrain vehicles and agricultural trucks. The program will pay a farmer up to 60% of the cost of a new Tier 4 tractor or harvester, 65% of a new truck and 5% of an electric UTV. As of June 30, 2019, the funding has replaced 130 trucks, 700 tractors and harvesters, 20 ag pumps and 950 ag UTVs statewide.

And these replacements have in turn generated significant emission reductions in a very short time. According to the California Air Resources Board, the equipment replacements to date have generated emissions reductions of 42,000 metric tons of CO2e, 230 tons of fine particulate matter and 3,700 tons of nitrogen oxide as of June 30, 2019.

If you look at more recent data just for the San Joaquin Valley, it is even more impressive. As of Nov. 12, 2019, the San Joaquin Valley Air Pollution Control District has 12 ag pumps, 1,549 UTVs, 784 tractors/harvesters and 152 trucks funded just through the FARMER program. And the amazing fact is that farmers throughout the state are ready to replace even more equipment.

According to the Air Resources Board, the ongoing demand for this money is more than twice the money that has been allocated. A major effort is brewing to go to Sacramento and demand more money be allocated toward FARMER funding.

The Legislative Analyst’s Office just announced that California will have a $7 billion surplus for Fiscal Year 2020/2021 and much of that would be available for “one-time expenditures.” The demand is there and so is the money. There is a real opportunity to meet a state mandate in a way that makes sense, one where all sides agree on doing it. Let’s not waste the chance.

The California Cotton Ginners and Growers Association provided information for this article.