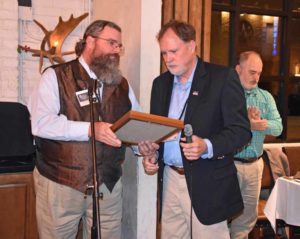 Dr. Dan Fromme, who grew up on a Texas cotton farm and has been working in cotton most of his life, was recognized as the 2020 Cotton Specialist of the Year during the recent Beltwide Cotton Conferences in Austin, Texas.

A professor and state Extension specialist in cotton, corn and grain sorghum at the Louisiana State University AgCenter in Alexandria, Fromme says he was caught off guard by the award.

“I was not expecting this after all of these years,” he said afterward. “Just look at the people who have received this award in the past 30 years – to see some of the names and what I’ve learned from them, how well respected they were and how much they taught me. It makes this quite an honor.”

Fromme became the 31st cotton specialist to receive the honor, which is presented annually by the Extension Cotton Specialists Working Group and for the past 14 years has been sponsored by FiberMax and Stoneville.

The award is designed to honor a cotton specialist for his or her accomplishments in helping producers be as profitable as possible, says Dr. Bill Robertson, University of Arkansas Extension cotton agronomist and a past honoree. “All of us know when producers are profitable, it’s good for everyone.”

In making the awards presentation, Dr. Steve Nichols, BASF head of global agronomic services – cotton, said, “(Dan’s) expertise and experience in cotton and agronomy has allowed him to make significant contributions to the cotton growers of Texas, Louisiana and to the cotton industry. His strong leadership and working relationships with producers, consultants and key stakeholders is widely recognized amongst his peers.”

Experience from the ground up

After receiving a bachelor’s degree in crops from Texas Tech University in 1979, Fromme started from the ground up. He worked in the private ag sector for four years and then served as an assistant county agent and county agent for Gonzales County east of San Antonio, Texas. 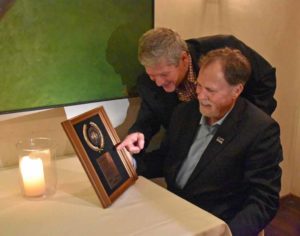 BASF’s Steve Nichols (standing) jokes with Dan Fromme about his Cotton Specialist of the Year award.

Along the way, he obtained a master’s of ag education from Texas State in San Marcos, Texas, in 1992.

After spending 13 years at the county level, Fromme became a Texas A&M integrated pest management agent, a position he held at Corpus Christi and Uvalde for a total of 10 years. Of those, seven were spent in row crops.

He also was encouraged to pursue a doctor’s agree in agronomy at Texas A&M University, which he completed in August 2007.

From Texas A&M, Fromme jokingly says he jumped the state line to join the LSU AgCenter as Extension cotton specialist based at the Dean Lee Research & Extension Center, a position he’s held for more than six years.

Fromme credits meeting LSU AgCenter’s Dr. Rogers Leonard, who was based at the Northeast Research Station in Winnsboro at the time, for his eventual move to LSU.

“I wouldn’t be here today if not for Rogers Leonard – he hired me,” Fromme says. “I really owe him a debt of gratitude. Coming to Louisiana was really icing on the cake.”

Fromme grew up on a farm near Sinton, Texas, on the Texas Gulf Coast, where both his father and grandfather grew cotton. His great grandfather also was a farmer, although not of cotton.