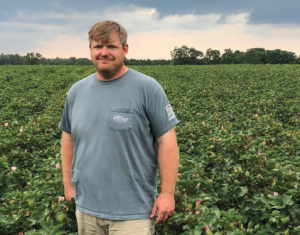 Aaron Burleson, (above), and his cousin, Andrew Burleson, share the daily responsibilities at Thurman Burleson and Sons Farm. They also have three employees — Robert Betka, Mark Allman and Danny Gathings — they depend on to keep the operation efficient and profitable.

In North Carolina, the Piedmont falls between the Atlantic coastal plain and the Appalachian Mountains. Aaron Burleson and his cousin, Andrew Burleson, farm about 2,500 acres of cotton, along with corn, soybeans and wheat, in the region. They also run 70 head of beef cattle. Their fathers, Dennis and Ronnie, respectively, participate in the operation, but Aaron and Andrew are the “boots on the ground” for day-to-day tasks.

Aaron’s grandfather, Thurman Burleson, worked as an electrician in Roanoke, Virginia, wiring battleships during World War II. In the mid-1940s, he returned to North Carolina, bought some land in the Piedmont, which translates to “at the foot of the mountains,” and started farming. He grew cotton for a couple of years, but the boll weevil got so bad that cotton disappeared from Stanly County for almost five decades.

“We started growing cotton again on Thurman Burleson & Sons Farm in 1991,” Aaron says. “Although my granddad died on Christmas Eve, he got to see our first cotton harvest before he passed away. We quickly realized the potential of the crop and knew we needed to diversify. We weren’t going to make it by growing $2 corn and $4.50 soybeans.”

The Burlesons started out with basket pickers and three cotton wagons they had to haul 80 miles to a gin in Bennettsville, South Carolina. In 1996, the family took a leap of faith and built their own facility — Rolling Hills Gin — in Stanly County.

“Even though it is small, it’s one of the most technologically advanced gins in the country,” Aaron says. “We ginned 41,216 bales this season. My cousin, Wes Morgan, is the gin manager and current president of the National Cotton Ginners Association. His wife, Missy, takes care of the office work.”

The Burlesons typically run two round module John Deere 7760 pickers, but they recently traded them for John Deere CP690 harvesters for the 2020 season. 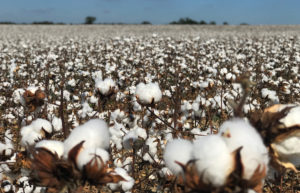 “We choose our varieties to have options to control glyphosate-resistant pigweed,” Aaron says. “Marestail and ragweed have also become more of an issue. Because the fields in this area are so small and often adjacent to our neighbors, we have to consider what they are planting as well.”

Although the varieties planted on their farm contain WideStrike and Bollgard to protect against worms, Aaron says they are fortunate that pressure from these pests is usually light.

“If any worms do show up, these traits just make our job easier,” he says.

The North Carolina farmers double-crop cotton and wheat if the year sets up right and they can harvest wheat in time to plant cotton behind it.

“This is always a game-time decision for us,” Aaron says. “We’ve double-cropped cotton and wheat about four times since 1991.”

In 2012, he recalls a field of cotton that was planted during the typical planting window. On the other side of the road, a field was planted May 31 behind wheat. It was a hot, dry summer, so the early cotton just shut down.

“We decided on that variety since the field had dicamba-tolerant cotton on both sides of it,” Aaron says. “Planting conditions were dry, so I was a little hesitant. But it turned out pretty good, picking about 1,000 to 1,100 pounds per acre.”

In a relatively good year, the North Carolina farmer says they apply inputs with a yield goal of 3 bales per acre. However, spotty thunderstorms can be a defining factor.

“One field may catch all of them, and another field miss them all,” Aaron says. “This can make the difference between picking 1,600 pounds per acre and making 900-pound cotton. In the end, we hope to average 1,200 pounds per acre. We have the potential to make really good cotton if we get the rain.”

The past season was a good cotton year overall, he says.

“Our average yield over the whole farm was 1,300 pounds per acre. Yields ranged from 1,000 pounds to more than 1,800 on some fields. We saw a lot of 21 and 31 color grades, which is good for us. We even had some 11s, which is rare. We had some cotton that didn’t get a drop of rain from the time it opened to the time it was delivered to the gin. This is an unusual occurrence here.”

The Cycle Of Life

Farming has its rewards as well as its challenges.

When asked what keeps him motivated to pursue this profession, Aaron says, “It’s in my blood. You are either born with it, or you are not. I also have a 10-year-old son, Bryce, and it’s exciting to see him take an interest in the operation. He likes going to the field and being a part of the farm. I see a lot of me at that age when I went to work with my dad.

“Another driver is our entire farming family is always trying to do something a little better the next year than we did the year before. It’s what we do.”