The troublesome plant bug is a cotton insect pest that is persistent – or so it seems. There is simply no other way to describe this devilish bug. It has always been around, but when the boll weevil eradication effort kicked into high gear in the 1980s and 1990s, the environment gradually changed. That’s when the plant bug began to appear with more regularity in cotton fields.

Strategies have been implemented through the years to deal with this pest. Most involved multiple insecticide spray applications and various tankmix combinations. Entomologists will attest that it can be an expensive approach when trying to control huge outbreaks.

In the Cotton Insect Loss Estimates report for 2013 compiled by Extension entomologist Michael Williams of Mississippi State University, the plant bug is again ranked as the No. 1 cotton insect pest in the country. In the Mid-South, the states most affected are Mississippi, Missouri and Arkansas, according to the report.

One of the new tools being used against plant bugs with success in 2013 and 2014 is Transform insecticide from Dow AgroSciences. Arkansas cotton consultant Steve Frizzell says introduction of the new product has made a big difference in reducing populations in the southeastern part of his state. 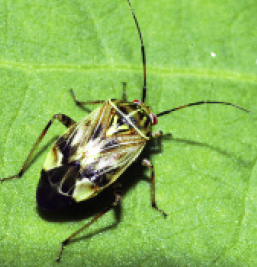 “We just don’t have that many options,” he says. “I have tried other residuals, and I know that my growers can’t stay in business spraying every five days. I am looking for an insecticide that will offer at least 10 days of coverage. That is what Transform is giving our farmers.”

One of the added bonuses of this insecticide is that it can work equally well on aphids. Frizzell says these pests only appear once a year, but he often puts out an application that can have simultaneous activity on aphids and plant bugs.

“We usually come in at mid-bloom with an application of an ounce and a half of Transform,” he says. “Then we come back 10 days later and tankmix it with something else. It has really worked well.”

Main, who previously worked as Tennessee Extension cotton specialist before joining Dow, says plant bug infestations are highly variable in parts of the Mid-South. That makes it hard to gain a consistent analysis of the pest’s behavior. For example, he has seen heavy outbreaks in parts of the Mississippi Delta where threshold levels were reached. Meanwhile, other parts of the region had much lower levels.

“This pest is here to stay,” says Main. “I can remember seven or eight years ago when a farmer would only make one application for plant bugs. Today, some are making four, five or six applications. It is encouraging that we now have a new way to control this problem.”

Bader Rutter, which represents Dow AgroSciences, contributed to this article. For more information, go to www.dowagro.com.