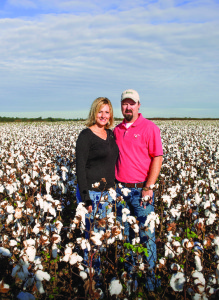 Every cotton producer has his own special way of growing the crop each year. You might say that South Carolina’s Jason Waltz has an unusual – but effective – approach. He does it all and rarely relies on anybody else for advice.

In today’s environment where farmers lean on consultants, marketing experts, scouts, entomologists and agronomists, Waltz is a one man show. He wears all the hats.

Think about that for a moment. Here is a young farmer who grew up watching his father Glen deliver a crop each year in the St. Matthews area, just southeast of Columbia, S.C.

In 2006, Jason starts farming on his own and hopes to put into practice what he learned from his father. In 2012, Waltz’s father then decides to retire and hand over the entire operation to his son. Now, the son is responsible for 1,500 cotton acres and 400 peanut acres.

“Farming has to be in your blood, and that’s how it is for me,” says Jason. “It’s the only thing I have known in my life.

“No matter how difficult things may have been through the years, I have never thought about doing anything else for a career.”

Strong Family Support
By any measuring stick, this young farmer has a major responsibility for the foreseeable future. Now, try to imagine a scenario where Jason marries his wife Michelle back in October. They each have two children from previous marriages, and now there are four children living together in this new “blended family.” Maybe it’s understandable that Jason is a one man show in his farming career. He certainly has more than enough family support with wife Michelle and four young children back at the house.

“If I make it or lose it, it’s nobody’s fault but mine,” he says with a laugh. “Like I said, I pretty much do everything by myself on the farm. But it is wonderful to have a wife and family as your support team. It isn’t any fun being by yourself.”

A Special Life On The Farm
Even though Jason prides himself as a farmer who wears many hats and tackles all of the big jobs by himself, he knows the importance of a strong support team.

“Hey, I help Michelle wash the dishes at night,” he says. “Well, I take that back. She washes them, and I do the drying. I also help fix breakfast in the morning for the kids.”

And what does his wife think about her life as a farmer’s wife with four children in the house?

“Jason is very easy to get along with, and is a very positive person,” she says. “I knew what I was getting into when we got married. This is just our lifestyle, and we wouldn’t change anything about it.”

As independent as Jason is in his approach to farming, he still talks to his father every day. And he relies heavily on assistant Wayne Fulmer and farm worker Federico Hernandez. Fulmer has been with the operation for many years and keeps the farm running when Jason is taking care of major decisions.

Plenty Of Soil Variability
One fact is clear about the Waltz farm. It has numerous challenges because of soil variability. Hills and terraces are part of the terrain, and about 50 percent of the acreage is irrigated with center pivots.

In order to maximize his yields, he implements a lot of precision ag technology, such as grid sampling and soil sampling. This approach helps in achieving maximum efficiency in the crop’s development. And, yes, he knows that he faces big challenges this year because of low cotton prices.

As far as I’m concerned, the true cotton farmer will plant cotton no matter how low the price goes… I certainly won’t be switching out of it.”

It would also be a fair statement to say that Waltz has benefitted from his participation in the Deltapine New Product Evaluator program. Since 2007, he has tested new varieties on his farm every year.

He is not a farmer prone to planting numerous varieties. Once he decides on one, he pretty much sticks with it until he’s ready to try something else. For several years, he planted DP 0920 B2RF, and that was his “go-to variety” because it consistently delivered high yields and excellent quality.

On his best fields, there was the potential for even higher yields, but boll rot problems affected the final numbers. Staple grades hit 36 and 37.

As for being responsible for all farm decisions, Waltz wouldn’t have it any other way.

“That’s the way I like it,” he says. “But, at the same time, I love having a family and my workers who help me.

“I wake up every morning, and I’m not overwhelmed at all. I try not to take anything for granted and stay on course.” 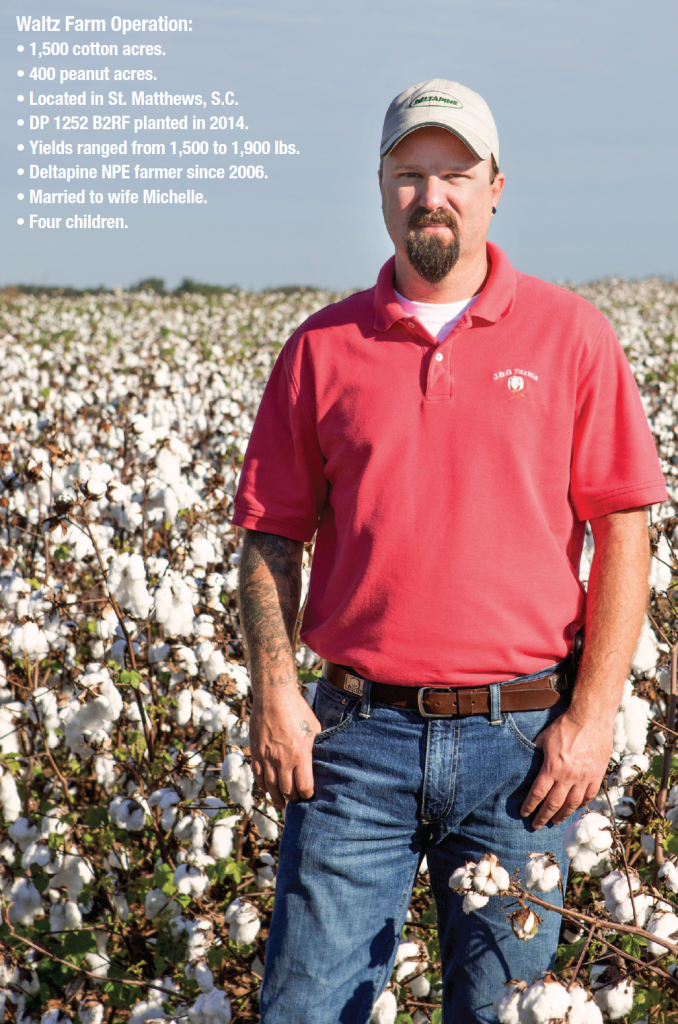