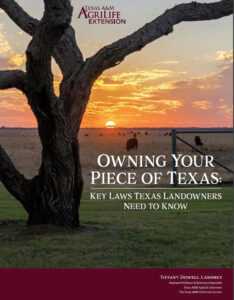 The Southern Center was established at the University of Arkansas Division of Agriculture in 2009 and serves several states in the region, including Texas.

Each year the center’s advisory council evaluates projects based on the importance of outcomes, audiences reached, realized and potential impacts, and quality and value of project communications. The Owning Your Piece of Texas program was selected as the top-ranking project from the 13 participating states.

“This attendance was unexpected, a bit overwhelming and very exciting,” Lashmet says. “We projected to have 125 people total at the live programs.”

According to the award announcement, “This project provided practical, important information to Texas landowners. From the Owning Your Piece of Texas handbook, to five live presentations, to an online recording of a presentation, this project achieved its goal of educating Texas landowners on legal issues they are facing.”

Lashmet says program attendees represented a wide range of backgrounds. A Kentucky couple flew to San Antonio to educate themselves on the legal issues they face with their family land in Texas. A widow overwhelmed by the pressure to manage the family operation without her husband also attended one of the sessions.

“Our focus on the practical aspects of the laws seemed to be something that participants really appreciated,” Lashmet says. “Rather than talking theoretically about the laws, we tried to really break topics down into practical steps to take home and put into place.”

Of those completing an evaluation, 98% of attendees reported intent to implement something learned from the program in their operation. Evaluations indicated a 71% knowledge increase over all topics, and multiple attendees dubbed this the best educational program they’ve attended to date.

While Lashmet says it took a considerable amount of time to write the accompanying handbook, the interest from people about the publication was far greater than anticipated and proves its worth.

A hard copy of the handbook can be purchased without attending the program by emailing Lacrecia Garza at lacrecia.garza@ag.tamu.edu.

Those interested in finding a future in-person or online event to attend can go to https://agrilife.org/texasaglaw/upcoming-presentations/ or email Lashmet at tdowell@tamu.edu.