I have been very proud of how good a job most of our producers are doing handling glyphosate-resistant (GR) Palmer amaranth. In both 2013 and 2014, I did not get a report of a cotton field that had to be destroyed because of GR Palmer amaranth. That is quite a change from four or five years ago when that call came in all too often. 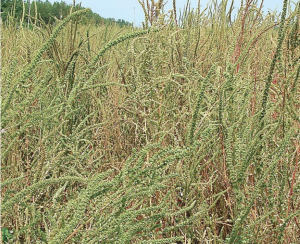 Unfortunately, weed control is not coming cheap or easy. Most of our cotton is planted no-till so a burndown of dicamba and glyphosate is very common. This is followed with Gramoxone plus a residual herbicide applied at planting because you cannot afford for a pigweed to be up at planting or to emerge soon after. This is followed with at least one and often two post applications of Liberty, typically tankmixed with another residual. Finally, many farmers have returned to running hooded sprayers and/or hiring a chopping crew when necessary.

Liberty has been the big difference in managing Palmer amaranth in cotton. It has become the backstop when the residual herbicides fail. Over the last three years, roughly 70 percent of Tennessee cotton had at least one Liberty application.

Liberty has been around for decades, and you would have thought after all that time we knew how to best use it. However, in both farmer fields and university research trials, we have learned how to better employ Liberty. It does not work well under cold conditions (highs in the 60s). It performs best when applied at 15 to 20 gallons per acre, and it has a four-hour rainfast period and needs every minute of it. Finally, recent research from the University of Georgia, North Carolina State University and the University of Tennessee has shown that the time of day Liberty is applied makes a big difference on how well it will control Palmer amaranth. Liberty is much more consistent controlling Palmer amaranth if it is applied between two hours after sunup to two hours before sunset.

The most recent development in weed control in cotton is that Roundup Xtend cotton is now deregulated. Producers will be able to apply both glyphosate and Liberty over the top of this cotton in 2015 and hopefully dicamba in 2016. For the first time, they can apply Liberty over the top of some Deltapine, Americot and Dyna-Gro cotton genetics. It appears that quite a few cotton producers may plant a large percentage of their acres to Roundup Xtend cotton this spring. This is a little startling to me that so many are willing to go with this cotton right out of the gate.

Please be mindful that there will be no label for dicamba in 2015 in Roundup Xtend cotton. The label we have for dicamba in Roundup Xtend is no different than for any other cotton, and the label states that it can be applied at burndown 15 days before planting for an eight ounce per-acre rate and 30 days before planting for a 12 ounce peracre rate.

When dicamba is labelled, we will have a good new tool to help control Palmer amaranth, particularly when applied pre-emergence to very early post. I really like it applied at planting where it can help control any GR Palmer amaranth or marestail that is up, plus provide some residual without injuring the cotton. The residual from dicamba, depending on the rate, is a good two to three weeks if it is dry. However, it is quickly degraded with rainfall, and that is why a residual will be warranted. Cotoran, Caparol and other commonly used residuals will need to be applied with dicamba for consistent and effective preemergence control.

Additionally, Enlist is a different herbicide trait technology from PhytoGen that may be available in the near future. Enlist will provide cotton with tolerance to 2,4-D, glyphosate and glufosinate (Liberty). It will also be a welcome tool to help manage GR pigweed.

From a weed management perspective, it has been a success the way cotton producers have tackled GR Palmer amaranth. In the future, it should be easier and hopefully less expensive when the new herbicide trait technologies are coupled with cultural practices like tillage where appropriate, cover crops and crop rotation. We will need to steward these new technologies responsibly to assure we have these useful tools in our weed control tool box for some time.

More about the author