100 Years That Changed Cotton Ginning For The Better

Remembering The Life And Work Of Paul V. Bush 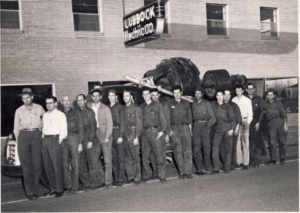 Each of us receives a limited time on this Earth. We might get 80 years if we are lucky. What can even be accomplished in one lifetime

Paul Vernon Bush, founder of Lubbock Electric Co., passed away Feb. 24, but his life serves as a testament to the difference that one person can make. Mr. Bush took an extraordinary 100 years of life and changed the face of cotton ginning in West Texas and beyond.

Paul Bush was born in Indianapolis, Indiana, on March 29, 1917, but he didn’t live there long. His father suffered from tuberculosis, which forced the family to move to the dry climate of Roswell, New Mexico, and later to Lubbock, Texas.

“Since he was the oldest child, Paul felt it was his duty to help support the family,” recalls Steve Moffett, current president of Lubbock Electric Co. and son-in-law to Bush. “Somehow, he managed to buy an old, used pickup. He would drive it to New Mexico, fill it with fresh fruits and vegetables, and return to sell them on Broadway after school.”

Following graduation, Bush got his start at Anderson Young Electric where he repaired electric motors and generators. In 1944, he launched Lubbock Electric Co. with one service truck and five employees. From day one, his motor repair and field troubleshooting services would be available to cotton gins 24/7 every day of the year.

Rocky Carey remembers why his father, O.R. Carey, superintendent of Community Gin at Claytonville, could count on Bush during gin season. “He could call both Paul Bush and G.E. Jones Electric out of Plainview (which was closer) and Lubbock Electric would always get there first.”

Bush was a master of all things electrical, but he did not stop at motors and controls. As he encountered challenges he could not solve, he added service departments.

“If a gin had an ongoing problem, it would eat him up,” says Jessie Perez, an employee with a 37-year tenure at Lubbock Electric. “Paul would visit the gin himself, even in his later years. He applied his experience and deep knowledge to analyze the issue. Ninety-five percent of the time he could solve it right there. The other 5 percent of the time, Paul would bring in an employee to help figure it out. No matter what, he was going to resolve the problem.”

“There was no way that I would miss it!” he says. Foster recalled that Bush would continue to visit before retiring at 92 years old.

“He would always say, ‘If we can help you, we’re going to help you. Let’s see if we can’t fix this and make it better.’”

Bush made numerous contributions that improved gin operations. For one, he pioneered single-drive setups. Master electrician Carey says that gins used to have one engine or slip-ring motor driving all of the machinery with a line shaft. This setup posed a danger to the safety of ginners, and it also exposed gins to a single point of failure.

“If that motor went down, the whole gin would go down,” Carey says. “By driving each gin line with its own motor, we could keep the cotton flowing even when one goes down.”

Another contribution was Bush’s popular double-hopper seed scale design, which is still in use today.

Johnny Davis, who has dealt in cotton gin parts for 46 years, remembers how Bush helped gins financially. “He would carry their bills on ‘fall terms,’ which means that gins could purchase as many products and services as they needed to make it through gin season, and they wouldn’t have to pay until they received their revenue. In this way, he probably helped hundreds of gins stay afloat.”