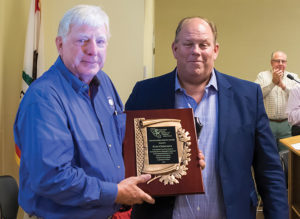 Stan Creelman, left, accepts the Distinguished Service Award from Roger Isom, California Cotton Ginners and Growers Association president and CEO. Isom made the presentation during a retirement party for Creelman earlier this summer.

The California Cotton Ginners and Growers Association honored Stan Creelman of Mid-Valley Cotton Growers earlier this summer, celebrating his retirement. He is widely recognized as a leader in the California ginning industry.

Roger Isom, California Cotton Ginners and Growers Association president/CEO, not only presented Creelman a plaque recognizing his dedicated years of service as a board member but also honored him with the 2019 Distinguished Service Award.

The first Distinguished Service Award was presented in 1992. It recognizes an individual who has made significant contributions to the association and/or the cotton ginning industry. The award is based on those deserving of it, thus it is not always given each year.

This year, the association says it was pleased to present the award to Creelman to recognize and honor his service, dedication and contributions to the California cotton industry. Creelman, who is a current board member and past chairman of CCGGA (2001-2002), just completed his tenure as the president of the National Cotton Ginners Association.

Throughout his career, he has gone above and beyond his call of duty as a board member from attending industry meetings across the country to making numerous trips to Sacramento to advocate on the industry’s behalf.

In 2012, the Tulare, California, ginner was named the 2011 Horace Hayden National Cotton Ginner of the Year. This award is presented annually to a ginner in recognition of able, efficient and faithful service to the ginning industry and continuation of the principles exemplified and practiced by Horace Hayden, a former NCGA executive secretary.

At the time, he also served on the NCGA’s board of directors. Other accolades included Creelman’s service as a National Cotton Council delegate, NCC board member and a longtime member and chairman of the Joint Cotton Industry Bale Packaging Committee.

At the conclusion of this summer’s celebration, the association thanked Creelman for all he has done to serve the cotton industry and the California Cotton Ginners and Growers Association and wished him and his wife, Denise, a happy retirement.

The Department of Labor, Employment and Training Administration and Wage and Hour Division posted a Notice of Proposed Rulemaking to solicit public comment on proposed changes to improve the H-2A temporary agricultural labor certification program.

These proposed changes would modernize the department’s H-2A regulations to respond to stakeholder concerns and enhance employer access to a legal source of agricultural labor while maintaining the program’s protections for the U.S. workforce and enhancing enforcement against fraud and abuse.

The proposal includes several major changes that would streamline and simplify the H-2A application process, strengthen protections for U.S. and foreign workers, and ease unnecessary burdens on employers.

For example, the proposal would streamline the H-2A application process by mandating electronic filing of job orders and applications, promoting the use of digital signatures and providing employers with the option of staggering the entry of H-2A workers on a single application.

Here is how the proposal would strengthen protections for U.S. and foreign workers:

• Expanding the DOL’s authority to use enforcement tools like program debarment for substantial violations of program rules.

The proposal also would codify and update procedures governing the certification for job opportunities in animal shearing, custom combining, beekeeping and reforestation.

Regarding the DOL’s announcement, Agriculture Secretary Sonny Perdue says, “President Trump once again shows his commitment to helping America’s farmers, ranchers and producers continue to be the most productive in the world by increasing their access to a stable and legal workforce.

“The proposed rule will increase access to a reliable legal agricultural workforce, easing unnecessary burdens on farmers, increase enforcement against fraud and abuse, all while maintaining protections for America’s workers. When this rule goes into effect, our farmers will be released from unnecessary and burdensome regulations allowing them to do what they do best.”

The NCC and industry interest organizations will analyze the proposal and submit comments. A copy of the proposal is at http://bit.ly/2JH9kHa.

The Texas Cotton Ginners’ Association provided information for this article.

Print & Email
california labor wage and hour 2019-09-01
Vicky Boyd
Previous: Is A Perfect Storm Brewing?
Next: Market Maintenance A Must