Dwayne Alford, former manager and vice president of YUCO Gin, and who provided several years of dedicated service to the U.S. cotton industry, is the 2017 Horace Hayden National Cotton Ginner of the Year. 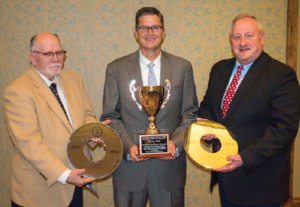 The annual National Cotton Ginners Association’s award is presented to a ginner in recognition of: 1) able, efficient and faithful service to the ginning industry and 2) continuing those principles exemplified and practiced by Horace Hayden, a former NCGA executive secretary.

Alford, who received the award at NCGA’s recent 2018 annual meeting in Fort Worth, Texas, grew up in Tucson, Arizona, and earned a bachelor of science degree in business administration from the University of Arizona before beginning his agriculture career in 1991. Since joining YUCO Gin in 2003, he has made several cost-cutting improvements to that operation.

Dwayne Alford’s Accomplishments
Over the past 14 years, Alford’s professionalism and integrity helped advance the ginning industry. He was a graduate of the National Cotton Council’s 2007 Cotton Leadership Program. Alford also served as an NCC ginner delegate, as an NCC director and chaired multiple NCC committees, among them the Research and Education Program Committee and the Joint Cotton Industry Bale Packaging Committee. A former president of the Arizona Cotton Ginners Association, he also served as NCGA’s president in 2014 and chaired several of its committees and subcommittees.

Outgoing NCGA President David Blakemore says one of Alford’s lasting accomplishments was the push to adopt a unique logo for bale packaging that would allow U.S. bales to be distinguishable in foreign warehouses. In just a few years’ time, the U.S. cotton industry adopted the “COTTON USA” logo, which now is being used on most U.S. cotton bales.

Rutherford, a Texas native, went to work for Lummus Industries as a field engineer in Lubbock, Texas, after earning his bachelor of science degree in agricultural engineering from Texas A&M University in 1983. After working in various positions with the company, including in Fresno, California, and in Columbus, Geogia, Rutherford returned to Lubbock where he currently serves as product general manager. In that position, he oversees the gin machinery product line regarding size and scope of product offerings, including product features and options and costing/pricing for sales.

Thompson, who was raised on a cotton farm near Bula, Texas, earned a degree in mechanized agriculture at Texas Tech University. After farming and custom cotton harvesting for several years, he joined the NCC as a Texas field representative in 1984.

In 2001, he became the manager of Marketing and Processing Technology in the NCC’s Technical Services Department in Memphis. In that role, he has provided staffing for the NCC’s Joint Cotton Industry Bale Packaging Committee, its Cotton Flow Committee and its Packaging and Distribution Committee. Thompson also has helped coordinate the NCC’s seed cotton and lint contamination prevention efforts.