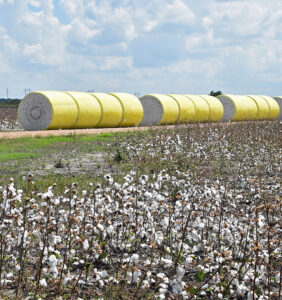 Strides have been made, but plastic contamination remains a threat to U.S. cotton’s marketplace competitiveness. Just when we think we have workable methods of handling and removing the yellow and pink premium module wrap, less-expensive and lower-quality versions of the wrap have become available.

For the past several years, we believed the production of a less costly but inferior wrap could eventually heighten the probability of plastic contamination in seed cotton, especially considering most of the plastic contaminants being found is from module wrap material.

Some ginners had a taste of this last year with some of the cheaper wraps. To compound the problem, several patents on the Tama wrap are set to expire, so there may be a greater rush to produce a less costly wrap.

To help address this concern, the U.S cotton industry is supporting the American Society of Agricultural and Biological Engineers (ASABE) as it develops a minimum round module wrap standard. The standard will help ensure that inferior materials are not being used and specify both material strength and performance levels based on the measurements of premium wraps.

The goal for this standard development is to determine the wrap system’s performance from the base material performance and from the combined effects of both multilayers and attributes, such as adhesives that withstand hot and cold environments, applied tension, the length of module storage in varying environments and other factors.

While this standard is voluntary, both the National Cotton Ginners Association and the National Cotton Council support its development/use and will strongly suggest that U.S. round modules meet the minimum acceptable ASABE standard. Final testing is being conducted with the goal of a ASABE vote on the revised standard later in 2021. Eventually, gins could request that producers use module wraps that meet this minimum performance standard.

On a related note, John Deere, which has been working on ways to lower the producer’s cost on a per-bale basis, recently announced the new 770 Series harvesters that will be available in limited numbers this year, in both stripper and picker models. To accomplish the per-bale wrap cost reduction, the machine will be able to produce a 96-inch diameter module, which will be 10% heavier.

In Deere’s recent memo to the NCGA, it states that a machine operator requesting the machine to make a module larger than 94 inches will receive an in-cab notice instructing them to contact their cotton gin to verify transport and that gin equipment can handle the larger diameter module.

No matter the diameter, the density will be 10% greater so all modules produced by the machines will be heavier. Unfortunately, we know that contamination increases when wraps are torn during transportation. The larger and heavier modules could become a concern when transported/handled by some of today’s conventional module trucks and module feeder beds.

After COVID-19 emerged last year, the NCGA and other gin associations primarily shifted to conducting virtual meetings to disseminate information to member gins. Although the NCGA ginner schools had been held without fail for the past 34 years, they were canceled in 2020 because of the pandemic. The association’s board agreed the three schools should resume in 2021 but with virtual training.

Thus, virtual seminars were made available for gin employees who normally would attend ginner schools and for certified ginners who needed continuing education credits. The gin school instructors determined the most important information to be conveyed in abbreviated fashion during the three four-hour seminars at each of the schools.

I believe the virtual seminars held this past April were a success as 119 gins and 265 participants enrolled. The three training sessions were recorded and made available on NCGA’s website at www.cotton.org/ncga/ginschool/index.cfm so all U.S. ginners can access this valuable information. Meanwhile, the NCGA looks forward to resuming in-person ginner schools in 2022.

Harrison Ashley, executive vice president of the National Cotton Ginners Association, contributed this article. Contact him at (901) 274-9030 or hashley@cotton.org.