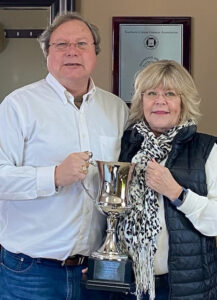 David Blakemore and his wife, Carolyn.

The annual NCGA award is presented to a ginner in recognition of providing able, efficient and faithful service to the ginning industry and continuing those principles exemplified and practiced by Horace Hayden, a former NCGA executive secretary.

President of Blakemore Cotton & Grain in Campbell, Missouri, Blakemore has served as both NCGA president and chairman, chaired several of its committees, and continues to serve as a NCGA director. He has been a National Cotton Council director, served on the NCC’s Quality Task Force and numerous other committees, and currently chairs the NCC’s Cotton Flow Committee. He also serves as director of the U.S. Cotton Trust Protocol, an industrywide sustainability initiative.

Blakemore served previously as a Cotton Incorporated director, as president of Cotton Producers of Missouri from 1994-1996, and as president of the Southern Cotton Ginners Association in 1999. In 2011, he was named that association’s Ginner of the Year.

Blakemore is a director of Ducks Unlimited, Ducks Unlimited Canada and Ducks Unlimited of Mexico. With help from his wife, Carolyn, he assisted the latter on projects to improve the quality and longevity of life to those living in rural Mexico by providing clean water. The couple also established scholarships for undergraduate and graduate students at Sogutheast Missouri State University.

Texas Native Recognized For Service To The U.S. Ginning Industry 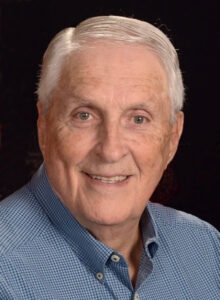 The National Cotton Ginners Association named Jerry Scarborough recipient of the NCGA 2020-21 Charles C. Owen Distinguished Service Award at its recent virtual annual meeting. The award honors those who have provided a career of distinguished service to the U.S. ginning industry.

A Texas native, Scarborough began working at the Petersburg Co-op Gin in 1960 before eventually landing at Lummus Corp. where he worked in sales. He assisted in selling, what was at the time the largest cotton gin processing complex in the world, to the American Cotton Growers in Crosbyton, Texas. That gin would be the first of two more of the “world’s largest” complexes, including the Adams Gin Co. in Arkansas.

In 1974, he relocated to Lummus headquarters in Columbus, Georgia, where he eventually was named vice president, sales, engineering and marketing for all Lummus operations. His duties took him to Russia, Turkey, Israel, several countries in Africa, Ecuador, Australia, Brazil and China.

In 1994, Scarborough co-founded Cherokee Fabrication, which grew from a small metal fabrication shop in Salem, Alabama, into a 140,000-square-foot factory, along with two satellite manufacturing and repair centers, in Lubbock, Texas, and Malden, Missouri. The business later included a complete line of cotton gin machinery.

The considerable time Scarborough devoted to meeting with engineering students at Texas A&M University resulted in many of them pursuing careers in the ginning sector. Some of them also have previously received NCGA’s Distinguished Service Award.

During its annual meeting, NCGA also reelected its 2021 officers: