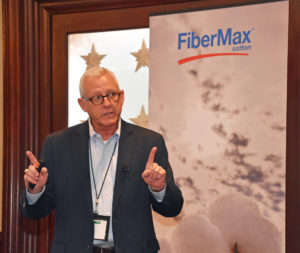 Kenny Melton, BASF western region agronomic manager, talks about how varieties performed in his region in 2019.

BASF plans to launch one new cotton variety for the 2020 season, sticking to its belief that any new release should offer a benefit over existing ones.

Further down the development pipeline are varieties that have tolerance to four different herbicide modes of action and resistance to three types of insect pests.

Melton, as well as other BASF representatives, discussed the company’s commitment to cotton development during the recent Agronomic Performance Trials Summit in Austin, Texas.

The newest addition to the FiberMax family, FM 2202GL is designed for the Texas High Plains and eastern plains of New Mexico where growers still have to plant a Bt refuge, Melton said. FM 2202GL has resistance to glyphosate and glufosinate herbicides, excellent Verticillium wilt tolerance and good bacterial blight resistance. It also has a semi-smooth leaf, moderate growth habits, a good fiber package and a storm tolerance rank of 5 out of 10.

In trials, it has shown high yield potentials under both irrigated and dryland conditions.

In addition, BASF has three Stoneville varieties released in mid-2019 that will be available for commercial planting this season.

• ST 4480B3XF is an early to mid-season variety from the Stoneville program designed for the shorter growing seasons in West Texas, Oklahoma and Kansas. It also has performed well in the northern Delta where growers may have planted late and want a shorter-season variety with good yield potential. ST 4480B3WF is resistant to bacterial blight, contains the three-gene Bollgard 3 worm protection and XtendFlex for weed control.

• ST 4990B3XF is an early to mid-season variety also from the Stoneville program that has performed well throughout the Cotton Belt. It is rated as fairly susceptible to root-knot nematode and Verticillium wilt and susceptible to bacterial blight.

• ST 5610B3XF is a mid- to full-season Stoneville variety that also has performed well throughout the Cotton Belt. It is rated as fairly susceptible to root-knot nematode and Verticillium wilt and susceptible to bacterial blight.

In addition, the company has plans to develop additional resistance traits to curb leaf and fruit-feeding insects.

The HPPD trait has already been deregulated in the United States but not in several other countries.

As part of product development, BASF is screening HPPD herbicides to determine which ones offer the best weed control with the least amount of crop response.

“Although it’s HPPD cotton, it’s not tolerant to every HPPD herbicide,” Baldwin said. “You have to be sure. That’s why we’re checking different HPPD herbicides to make sure we have enough tools and options for growers.”

The goal is to offer growers another weed resistance management tool and improved control of Palmer pigweed as well as other weeds.

Based on research, he said it appears Alite 27, BASF’s brand of isoxaflutole, has a fit as part of a tankmix with a residual herbicide for a pre-emerge treatment. An alternative being explored is an early post-emerge treatment of Armezon — which contains the active ingredient topramezone — tankmixed with a knockdown herbicide.

Armezon, also an HPPD, is registered for use in corn but not yet in cotton.

2019 was the first year that Extension weed specialists from seven South and Mid-South universities were able to test advanced GLITP varieties resistant to glyphosate, glufosinate and isoxaflutole herbicides. They also contain TwinLink Plus worm control.

BASF researchers got their first glimpse of a GLIXTP variety in 2019 in small-plot company trials. In addition to the other traits, it contains the Xtend dicamba tolerance trait.

The soonest a GLITP cotton variety could be on the market is 2023, Baldwin and others said. The exact timing will depend on regulatory approval of the herbicides as well as import approval from global trading partners.