As of July 1, the Crop Production Services, or CPS, name will be no longer. In its place will be Nutrien Ag Solutions. The new brand name will align retail business across the globe and strengthen the company’s long-term mission of helping growers increase food production, according to a news release.

The name change will apply to all offices and operating facilities in North and South America that formerly were Crop Production Services, Agroservicios Pameanos and Utilfertil.

The name change was prompted by the merger of Calgary, Canada-based Agrium with Potash Corp. in January. Farmers in the East had known the CPS brand in ag retail since 1983. Agrium bought the CPS retail chain in 1994. Shortly after in 1995, 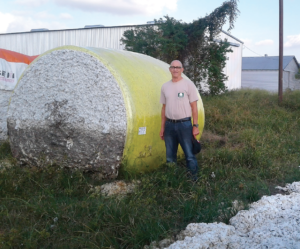 Flooding from Hurricane Harvey damaged freshly harvested cotton on the upper coast of Texas in early September 2017. The watermark was still evident on this round bale in November.

Producers affected by hurricanes and wildfires in 2017 may apply for assistance. Signup continues through Nov. 16, 2018. An NCC-prepared summary, which includes an example of how the program will operate, is on the National Cotton Council’s website at www.cotton.org/econ/govprograms/ag-disaster-asst-programs.cfm.

Ag Secretary Sonny Perdue says, “We are making immediate, initial payments of up to 50 percent of the calculated assistance, so producers can pay their bills.”

Additional payments will be issued, if funds remain available, later in the year. The program, known as the 2017 Wildfires and Hurricanes Indemnity Program (2017 WHIP), was authorized by Congress earlier this year by the Bipartisan Budget Act of 2018.

Eligible crops, trees, bushes or vines, located in a county declared in a Presidential Emergency Disaster Declaration or Secretarial Disaster Designation as a primary county, are eligible for assistance if the producer suffered a loss because of a 2017 hurricane. Also, losses located in a county not designated as a primary county may be eligible if the producer provides documentation showing that the loss was due to a hurricane or wildfire in 2017.

A list of counties that received qualifying hurricane declarations and designations is available at https://bit.ly/2JENtNo.

Agricultural production losses due to conditions caused by last year’s wildfires and hurricanes, including excessive rain, high winds, flooding, mudslides, fire and heavy smoke, could qualify for assistance through the program. Typically, 2017 WHIP is only designed to help with production losses. However, if quality was taken into consideration under the insurance or

Noninsured Crop Disaster Assistance Program policy, where production was further adjusted, the adjusted production will be used in calculating assistance under this program.

The 2017 WHIP payment factor ranges from 65 to 95 percent, depending upon the level of crop insurance coverage or

Each eligible producer requesting 2017 WHIP benefits will be subject to a payment limitation of either $125,000 or $900,000, depending upon their average adjusted gross income, which will be verified.

Both insured and uninsured producers are eligible to apply for 2017 WHIP. However, all producers receiving 2017 WHIP payments will be required to purchase crop insurance and/or NAP, at the 60 percent coverage level or higher, for the next two available crop years to meet statutory requirements. Producers who fail to purchase crop insurance for the next two years will be required to pay back the 2017 WHIP payment.

Once signup begins, a farmer must provide verifiable and reliable production records. If a producer is unable to provide production records, the U.S. Department of Agriculture will calculate the yield based on the county average. A grower with this information on file does not need to provide it again.

AgSense is the remote agricultural management technology from Valley. The AgSense mobile app now offers a simplified, cohesive experience, with the addition of many intuitive features previously only available on the website interface. The enhancements give growers increased ability to remotely monitor and control their entire irrigation operation from anywhere at any time. These are the new options:

• Groups – Multiple AgSense devices can be sorted into groups, making it easier to set up an irrigation schedule for all devices within a group.

• Timed commands – New graphics and more control options for editing a device’s irrigation schedule with a single tap of the screen.

• The new “yearly allotment” graphic improves tracking of a pivot’s water use throughout an irrigation season.

The AgSense mobile app is available from Google Play (v1.19) and from the Apple App Store (v1.19). 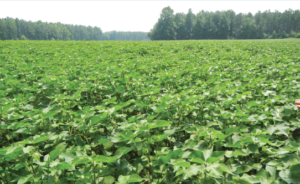 Cool temperatures in April halted planting until early May. Hot temperatures and low rainfall in May made for difficult planting. Many growers stopped planting because of the dry conditions. When rain did arrive in late May, it rained constantly for a large part of June.

“It was hard this spring to get cotton planted and emerged in the desired time period,” he says. “It was also a challenging spring to manage post emergence weeds.”

Now, south Alabama is dealing with a split crop. Birdsong estimates that 50 percent of the cotton crops will be late. With what is essentially two different crops, farmers will have a challenge when it comes to making management decisions.

Cotton normally develops slowly because it goes through a period where the temperatures are cooler. Later-planted cotton grows during times with much higher temperatures, causing it to change rapidly.

“All nutrients, such as nitrogen, should be applied early, somewhere in the third to sixth true leaf. Nitrogen doesn’t activate until it rains. If we go through a period with no rain, that cotton is not getting the nitrogen it needs. This slows the cotton’s growth and development.”

Birdsong says, “This late crop will reach peak water demand somewhere around the first of September — historically the second driest natural rainfall month for Alabama. This certainly is concerning when considering the dryland late planted crop.”