“Also being evaluated this season is a set of Bollgard 3 XtendFlex technology candidates in new genetics that bring variances across the board,” says Keylon Gholston, Deltapine cotton product manager. “But they all bring high yield potential equal to, or better than DP 1646 B2XF.”

“These variety candidates are from a unique set of germplasm that will be very different from what growers, especially in West Texas, currently have in a Deltapine bag,” Gholston says.

Now in its 16th year, BASF continues to celebrate cotton growers who achieve four-bale or greater yields as part of the FiberMax One Ton Club. Seventy-eight members across Texas, New Mexico and California qualified for the club this year. Total membership 1,215.

While members and their families were not able to celebrate in person due to the pandemic, their achievements were acknowledged through a video highlighting the families that make up the One Ton Club. Mark Howard of H Bar H Farms in Dalhart, Texas, shares his family’s tradition of growing FiberMax cotton and talks about the affect the club has had.

“The One Ton Club is an honor, and it’s a thrill to be able to grow that kind of cotton,” says Howard, who is in his sixth year of the club. “Cotton is challenging; it’s a crop that has risks, but also your best rewards. So, it’s great to see and celebrate the success of your peers as part of the One Ton Club.”

“There is a unique quality to the One Ton Club member that makes this group of cotton growers so special: toughness,” says Rachel Walters, cottonseed marketing manager at BASF.

Amvac To Acquire Herbicide From Syngenta 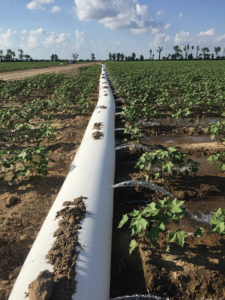 A new online resource is helping agricultural producers find technologies to improve water conservation on irrigated land. The Mississippi State University Extension Service is among four land-grant universities collaborating on the webpage, which is available at http://surfaceirrigation.extension.msstate.edu. The page hosts dozens of publications and videos related to irrigation, as well as product demonstrations.

“One-third of irrigated acres nationally remain under flood systems for any number of hydrologic, agricultural and economic reasons,” says Drew Gholson, an assistant MSU Extension professor and irrigation specialist based at the MSU Delta Research and Extension Center in Stoneville. “It is important to not overlook flood systems and to foster efforts towards improving water conservation in these systems.”

The Environmental Protection Agency has registered AZterknot fungicide from Vive Crop Protection for use on a wide array of crops, including corn, cotton, peanuts, rice and soybeans.

It is a premix of a traditional strobilurin fungicide, azoxystrobin, and a biological, an extract of the plant Reynoutria sachalinensis. They are delivered using Allosperse, a proprietary nano-polymer technology developed by Vive that allows previously incompatible products to be mixed and applied in one application, reducing fuel, time and water use, according to a news release.