Brands, retailers, mills and other cotton fiber value chain companies sourcing e3 Sustainable Cotton will have the opportunity to contribute money to the fund. At the end of each year, 100% of those funds will be distributed equally to e3 Sustainable Cotton farmers in addition to a $2.50-per-bale premium BASF provides to farmers enrolled in the program.

“Our program is based on three pillars, one of which is to grow sustainable cotton in an economically viable way,” says Jennifer Gasque-Crumpler, e3 Sustainable Cotton program manager for BASF. “Our vision for honest, fair, sustainable cotton isn’t possible without our dedicated farmers.

“We’re grateful to our cotton fiber value chain collaborators who also understand the importance of rewarding their effort and are joining us in this first-of-its-kind commitment.”

NCC Chairman Reelected To Lead In 2021 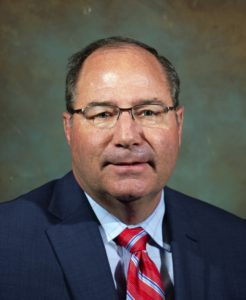 Kent Fountain, a Surrency, Georgia, ginner, was recently reelected National Cotton Council chairman for 2021 during the organization’s virtual annual meeting. Ted Schneider, a Lake Providence, Louisiana, producer, was reelected to the position of vice chairman for 2021.

A member of the NCC’s 2001-2002 Cotton Leadership Class, Fountain served as a NCC vice president from 2016-2018 and as a NCC director in 2011. He has served on multiple NCC committees, including chairing its Quality Task Force.

Fountain, who earned an agricultural economics degree at the University of Georgia, is the president/CEO of Southeastern Gin and Peanut Inc. in Surrency.

He and his wife, Missi, live in Screven, Georgia, and have two sons.

The Mississippi House of Representatives passed House Bill 1439 that proposes to raise the sales tax on farm tractors and parts, farm implements, and tree farming equipment from 1.5% to 4%. Dairies will see an increase of 2.5% to their supplies for farm buildings.

This increase, along with an increase to almost all sales tax, was done to recoup lost revenue from the bill’s elimination of the state income tax and reduction of the grocery tax by 50%.

The Mississippi Farm Bureau says, “Our staff continues to research the bill, and its effect on Mississippi’s number one industry — agriculture. There are some things we do know already.

“Poultry and livestock producers will see a 2.5% increase on any equipment and parts. In a large row-crop operation, this equates to an annual increase of $75,000 or as much as the salary of two farm employees.”

MFB says as this legislation moves to the Senate, they will continue monitoring its impact on farmers, ranchers, rural Mississippians and Farm Bureau members.

San Luis Reservoir, located south of the Sacramento-San Joaquin Delta, was
designed to store water captured during winter and spring runoff for using during the summer.

Based on below-average statewide snowpack, the Bureau of Reclamation recently announced reduced water allocations for nearly all Central Valley Project water contractors. Deliveries could change depending on precipitation received during the next few months, said Ernest Conant, Reclamation regional director.

The California Department of Water Resources reports that as of Feb. 21, statewide average snow water content in the Sierra Nevada was 54% of the April 1 average. Current Northern Sierra precipitation is 52% of the seasonal average to date

“After a slow start to the water year and despite a couple of precipitation-packed storms in January and February, conditions in California unfortunately remain below average,” Conant said during a virtual press conference.

In addition, several south-of-Delta and Friant Division contractors are rescheduling unused water from 2020 supplies into 2021. That water is being stored in San Luis Reservoir and Millerton Lake.

The option to reschedule (carry over) water in San Luis Reservoir and Millerton Lake from one contract year to the next has been available to the water service contractors since the early 1990s.

Print & Email
Drought NCC sustainable 2021-03-01
Vicky Boyd
Previous: A Century Of Cotton
Next: California Cost Of Ginning Much Higher Than Other States