In 2021, FMC launched Vantacor Insect Control powered by Rynaxypyr active for long-lasting residual control of lepidopteran pests. This is the same active found in Prevathon insecticide.

Vantacor contains a high concentration of Rynaxypyr, so 20 ounces of Prevathon is equivalent to 1.7 ounces of Vantacor. FMC says the new brand provides the same efficacy as Prevathon with residual up to 21 days.

Vantacor is easier to handle and transport and is rainfast as soon as it dries. It doesn’t flare mites or aphids and has minimal effect on many important beneficial insects.

FMC’s regional technical manager, Eric Castner, says, “Vantacor has a positive environmental and worker protection profile. It doesn’t even have the word ‘caution’ on the label, and the PPE and reentry intervals are minimal.”

Castner recommends selecting the best cotton varieties for your farm and using Vantacor to manage bollworms at 1.7 ounces per acre when 20% of the plants have eggs.

He also says to use enough gallonage to achieve good coverage and don’t let your guard down in three-gene cotton under heavy bollworm pressure. 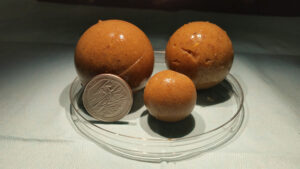 Scientists with the Louisiana State University AgCenter and the LSU Department of Chemistry are working on a bait and delivery system to help reduce the population of feral hogs.

Glen Gentry, LSU AgCenter feral hog specialist, and John Pojman, a chemistry professor, have been working for more than two years on perfecting a bait and delivery system that minimizes the risk to off-target animals.

The researchers had to look at several factors when developing the bait. One involved choosing a formula that was more attractive to hogs — based on features such as smell and texture — than to other animals such as deer or raccoons. Pojman’s doctoral students, Anthony Mai and Anowar Khan, helped develop the bait. Because it is soft, the pigs can swallow it whole, leaving no crumbs for scavengers.

Because of the unique metabolism of feral hogs, sodium nitrite is more effective on the hogs and poses a low risk to humans.

“If the hogs eat a sublethal dose and a hunter were to kill it and eat it,” Pojman says, “there’s no danger to them. Also, if a hog dies somewhere and predators or scavengers find it, they would not be contaminated with the bait.”

Another part of the solution involves delivering the baits when hogs are actively feeding. Gentry has a prototype that can deliver up to 20 baits when it is activated.

The system has a live feed camera installed that people can monitor from their homes or phones. If the camera sends an alert and shows pigs are present and feeding, baits can be released remotely. This feature also helps eliminate the chance of other species being fed the baits.

U.S. producers are urged to visit www. trustuscotton.org to enroll their 2021 cotton crop in the U.S. Cotton Trust Protocol. Existing members will need to reenroll their cotton operations to receive the year-over-year data from the Fieldprint calculator that helps track sustainability progress at the farm level.

To access the help desk, producers may email growers@trustuscotton.org. The help desk will answer their questions and provide step-by-step enrollment assistance.

Effective June 30, Plains Cotton Growers Inc. CEO Steve Verett has decided to retire after 24 years of service to the organization and the High Plains cotton industry. He notified the PCG board of directors of his decision at the April 9 board meeting.

Verett has served as the CEO of the Lubbock-based organization since 1997 and is only the third person to hold this role since PCG began in 1956.

Before becoming CEO, he was a producer board member from Crosby County, PCG board president in 1988-89 and chairman in 1990-91. He also served as chairman of the PCG Boll Weevil Steering Committee in 1992-93.

Since joining the PCG staff, Verett’s leadership has established a positive environment. It encourages staff and volunteer leaders to find ways to improve the organization to meet the unique challenges that face the region’s cotton economy.

In the past 24 years, Verett has worked on countless legislative and regulatory efforts, including the development of four Farm Bills, crop insurance reform and numerous ad hoc assistance programs. One of the most notable efforts where he and PCG played a central role was getting cotton back into Title 1 of the 2014 Farm Bill.

Verett is also actively involved in numerous professional and community activities. In 2006, he was chairman of the Lubbock Chamber of Commerce and the first cotton producer to serve in that capacity.

In 2017, Verett was named by Farm Credit as one of the Top 100 Leaders in agriculture and rural communities nationwide. In 2006, he was honored by his peers for his service to the U.S. cotton industry when he was named the recipient of the prestigious Cotton Achievement Award.

In his retirement, Verett plans to continue working on the farm as well as spending more time with his wife, Patricia, his kids and his grandkids.

Following the announcement, the PCG board of directors voted to name Kody Bessent as the next CEO of PCG, effective July 1. Bessent currently serves as PCG vice president of operations and legislative affairs.

California farmers and ranchers are finding it increasingly difficult to purchase wildfire insurance for their businesses and properties. The California Farm Bureau welcomed a recent call by the state insurance commissioner for data on commercial insurance coverage.

“We thank Commissioner Lara for leading the efforts to bring certainty back to the wildfire insurance marketplace,” Johansson says. “Farmers and ranchers from around the state have told us they have been unable to renew insurance and have not been able to find replacement coverage. Commissioner Lara’s action should help us determine the breadth and depth of the problem.”

In a notice issued April 14, Lara directed insurance companies to provide data about the availability of commercial insurance for businesses including farms, ranches, cotton gins, timber harvesting operations, wineries and other agricultural businesses.

“We believe the commissioner’s action will help us move toward a long-term solution,” Johansson says. 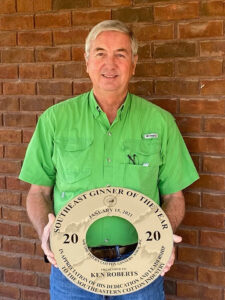 Each year, the Southeastern Cotton Ginners Association recognizes one of its members as the Ginner of the Year. The selection guidelines require that the ginner be an active member of the association and a progressive ginner who strives to keep cotton strong in their community.

The candidate must also be active in managing his or her operation, a participant in business and civic affairs, respected by the ginning community and supportive of the cotton industry. Ken Roberts, manager of the Miller County Gin Co. in Colquitt, Georgia, is the 2020 recipient of the award. The association says he embodies each of these traits in a big way.

Roberts already had a full career working as an ag pilot and for Georgia Pacific before taking the reins of the newly built plant in 1995. He became a certified ginner in 1996.

There have been a lot of changes in cotton and at the gin since 1995. Since being hired as manager, Roberts has overseen expansions at the plant, including capacity increases and automation. He also is an industry leader and has served several terms as a director of the Southeastern Cotton Ginners Association as well as held positions in other cotton organizations.

Roberts’ leadership extends beyond the gin with roles as deacon in his church and treasurer for his local camp with Gideon’s International. He has been a volunteer firefighter at Miller County Fire Department for more than 40 years and is now assistant chief. He also has served on the Colquitt City Council and the Colquitt Chamber of Commerce executive board.