“Continued growth in West Texas, as well as expansion into new areas, necessitates that we add additional resources to support our customers in the region,” says Chiree Fields, Americot general manager. “I’m pleased that Lucy, Daniel and Dusty have joined the team, further demonstrating our commitment to growers by providing the experienced, knowledgeable and dedicated support they have come to rely upon from Americot.”

Carmichael earned a bachelor of arts degree in advertising with a minor in agriculture communications from Texas Tech University in 2018.

Growing up in Haskell, Texas, Carmichael comes from an agricultural family, both on the cotton side, as well as cattle ranching.
Based in Lubbock, Texas, she joins Americot as a marketing coordinator, supporting the sales teams and customer marketing activities throughout the Cotton Belt.

Nix was raised in Tolar, Texas, growing up on a cattle and peanut farm. He graduated from Tarleton State University, earning a bachelor of science degree in plant and soil science in 1994.

Nix joins the company from Crop Production Services in Slaton, Texas, where he was in sales. Based in Gail, Texas, he will be a sales representative working the Lubbock County area as part of the South Plains regional team.

Parker grew up on a corn and cotton farm in Uvalde, Texas. He’s a graduate of Southwest Texas State University (now Texas State University), where he earned a bachelor of science degree in agriculture in 2002. After spending the past 15 years as a sales rep and branch manager for Helena Chemical Co., Parker joins Americot as a sales representative based in Lubbock, where he will support growers and customers in the Dawson County area.

For more information about Americot and its NexGen brand cotton products, call 888-678-7333 or visit www.americot.com.

The 2014 Farm Bill expired on Sept. 30. Congressional leaders now face the task of finding a compromise that can be approved by both chambers in a lame-duck session after the mid-term election. President Donald Trump must sign the bill by the end of the calendar year.

Rep. Mike Conaway (R-Texas) says the impasse is bigger than one person or even a single issue. He’s not ready to concede, and there is talk of a one-year extension. However, time is running out for the negotiators. The House has adjourned for the rest of the campaign season, so a new Farm Bill can’t be passed until after the election, even if the negotiators could reach a quick agreement.

Conaway and Sen. Pat Roberts (R-Kan.), ag committee chairman, say their goal is to have a final bill ready by November to move through the House and Senate. The House is out until after the general election Nov. 6.

In a show of unity recently, the chairmen and ranking Democrats on the House and Senate Agriculture committees emerged from a session together and posed arm in arm for reporters who were waiting outside. “I think we’re making progress,” Roberts says.

Roberts says they closed out three of the 12 titles — trade, credit and energy. Energy was the toughest since the House-passed bill would eliminate that section altogether.

One of the fiercest battles is a dispute between Conaway and Roberts over a provision in the House bill that would end payments on base acres that have not been planted to a program crop for the past 10 years. The provision would save $900 million, which would pay for revising yield averages for farmers enrolled in the Price Loss Coverage program whom have experienced extended periods of severe drought.

Roberts says cutting off payments for unplanted base would be unfair to farmers who get that money and run afoul of the planting flexibility introduced by the 1996 Farm Bill. Conaway argues that making payments on land that has been in grass for a decade is no longer justified. 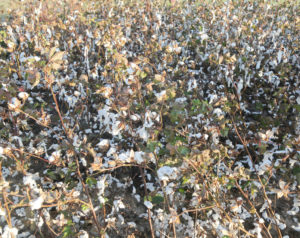 To help residents, farmers and ranchers affected by the devastation caused by Hurricane Michael, U.S. Secretary of Agriculture Sonny Perdue has directed the U.S. Department of Agriculture to aid people in their recovery efforts.

USDA staff in the regional, state and county offices are actively responding, providing emergency response staffing and offering a variety of program flexibilities and other assistance.

“The widespread devastation I saw in Georgia while surveying the damage this week makes clear that many agricultural producers were significantly impacted by this storm,” says Perdue, who traveled to storm-affected areas in Georgia with President Donald Trump and Vice President Mike Pence.

Trump’s disaster declarations for Florida and Georgia mean eligible producers in those states can take advantage of a USDA emergency loan program.

These low-interest loans help farmers and ranchers recover from production as well as physical losses.

USDA also offers additional programs tailored to the needs of specific agricultural sectors to help producers recover from losses and to help rebuild their operations.

Producers who suffer losses to or are prevented from planting agricultural commodities not covered by federal crop insurance may be eligible for assistance under USDA’s Noninsured Crop Disaster Assistance Program if the losses were due to natural disasters.

Farmers and ranchers who suffered damage to working lands and livestock mortality due to Hurricane Michael are encouraged to contact their local USDA Service Center. USDA has multiple programs to help producers manage their operations.

Farmers and ranchers needing to rehabilitate farmland damaged by natural disasters can apply for assistance through USDA’s Emergency Conservation Program.

Whether in a federally declared disaster area or not, technical and financial resources also are available through USDA’s Environmental Quality Incentives Program to help with immediate needs and provide long-term support to help recover from natural disasters and conserve water resources.

Producers with coverage through the Risk Management Agency administered by the federal crop insurance program should contact their crop insurance agent for issues regarding filing claims. Visit the RMA website, www.rma.usda.gov, for details.

For more information, contact your local USDA Service Center. To locate the office, go to offices.usda.gov.

In its October newsletter, the California Cotton Ginners and Growers Association published its reaction to state legislation Senate Bill 901. Here are its remarks.

“This past month, the California Legislature passed, and the governor has now signed, Senate Bill 901 (Dodd) that will without a doubt increase our members’ electric bills for those located in the Pacific Gas &Electric territory. Despite association pressure and the fact this adds thousands of dollars per month to electricity rates, the Legislature gave PG&E the blank check they were looking for.

“The Legislature put this legislation together in less than a week, with little notice and even less transparency, in typical ‘last week of session fashion.’

It was developed by a legislative conference committee tasked with addressing the wildfire and utility liability issue, and they jammed through a massive bailout for PG&E standing with their shareholders over ratepayers, including businesses and homeowners in California who will experience skyrocketing energy bills.

“The legislation SB 901 requires ratepayers to cover whatever damages are beyond the cap placed on PG&E, even if PG&E is found negligent in the massive 2017 fires. At $10 billion in liability, customers will pay an additional 0.5 cent per kWh for the next 20 years! The association fought the bill vigorously alongside many ag groups, such as Western Growers Association, Ag Energy Consumers Association, California Citrus Mutual and others.

“Association President/CEO Roger A. Isom stated, ‘Our members cannot afford any more rate increases to the already highest industrial electricity rates in the country. To put this on our backs is unequivocally unacceptable. We refuse to pay for their negligence and wholeheartedly oppose this legislation.’”