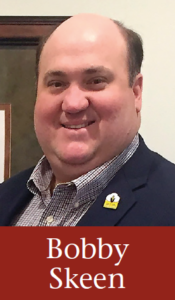 Although I was not raised on a farm nor from a farming family, I always loved animals, especially cows and horses. I considered myself a cowboy and planned to major in pre-veterinary medicine when I started college at the University of Louisiana at Monroe (at the time, Northeast Louisiana University) in August 1996.

My academic advisor encouraged me to pursue an undergraduate degree in agricultural business while taking the pre-vet courses. Before long, I found myself taking more ag classes than pre-vet courses and getting more involved in the NLU ag organizations, such as the Block & Bridle Club. I was quickly becoming an “ag” kid, feeling like I’d been around it all my life.

After graduating, I went to work for the Louisiana Agricultural Corp. Self-Insured Fund, a self-insurance program for agribusinesses that operated in Louisiana and Arkansas. This program was started by some of Louisiana’s brightest minds in the ag industry, including Jack Hamilton, George Franklin and Sam Leake. I handled safety and loss control issues for cotton gins, cotton warehouses, grain elevators, farm supply stores and farming operations. I met many of Louisiana’s agricultural leaders, such as Jay Hardwick, George LaCour, Ted Schneider, Tap Parker, Boyce Stone and Billy Guthrie. During my first year, I got a crash course in agriculture, especially in cotton.

A few years later, I was hired as the Mid-South regional communications manager for The Cotton Board, alongside three guys who would become my “brothers in cotton” and dear friends — Monty Bain, Bob Stanley and Brent Murphree. Since I was the youngster of the bunch, they “took me to raise” in many ways I am thankful for. I became heavily involved in cotton and met many of its legends — as I thought of them — including Kenneth Hood and Woods Eastland from Mississippi, Bill Weaver from Arkansas, Charles Parker from Missouri and Richard Kelley from Tennessee. There are truly too many to mention and even more who are still my close friends and colleagues today.

In 2015, I was offered a position I never thought a person of my age and relatively short 15-year agricultural career was qualified for. The Louisiana Cotton & Grain Association officers selected me to serve as its next executive vice president. I was amazed, excited and extremely humbled. This organization was started in 1968 as Louisiana Cotton Producers Association by Jack Hamilton, Fred Schneider, Duke Shackelford and many others.

I advocate on agriculture’s behalf on the state level and in Washington, D.C. I get to sit next to Chip Morgan, Mississippi Delta Council; Andrew Grobmyer, Ag Council of Arkansas; and David Ruppenicker, Southern Southeastern, who happened to be the first executive vice president of the Louisiana Cotton & Grain Association. I still have to pinch myself from time to time when I am sitting at our board room table with the LCGA officers and executive committee, walking the halls of the Louisiana State Capitol visiting with legislators, or in Washington, D.C., meeting with the Louisiana delegation on Capitol Hill. I look at the diploma from LSU where I graduated from the Agricultural Leadership Development Program and am so humbled at the many blessings God has granted me.

My dad once told me: “If you find a job you love, you’ll never work a day in your life.” I love what I do and look forward to each and every day. Although I started in cotton, I now represent multiple commodities, including corn, soybeans and grain sorghum. At LCGA, we continue to spread the “gospel” of agriculture and educate our communities on the importance of both food and fiber.

A wonderful quote from President George Washington reads, “Agriculture is the most healthful, most useful and most noble employment of man.” I have faith in these words and believe in sharing them. GEAUX AGRICULTURE!