Bootprints In The Dirt 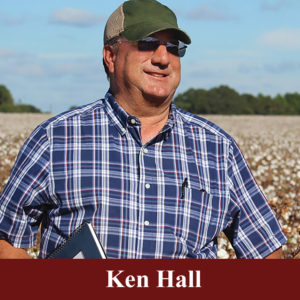 I am an only child and a third-generation Georgia farmer. As a little boy, I was fascinated with equipment and loved going to the farm with my dad, Kenneth.

There’s a lot of truth to the phrase “following in your father’s footsteps.” While walking behind him in the field, I saw Dad’s bootprints in the dirt and tried to put my bootprints in his. At first, I just rode with him and the employees or drove the tractor while they laid irrigation pipe.

The first job I did by myself was spray tobacco. As I got older and bigger, I was able to do more. I knew early on that I wanted to farm.

In 1980, I graduated from high school, rented 100 acres and worked it on halves with a fellow. At first, I used Dad’s equipment and then started buying a piece here and there on my own. I grew peanuts, soybeans and corn, but 1980 was extremely dry, and I didn’t make anything. Even on Dad’s ground, we didn’t harvest one peanut. It was that dry.

Luckily, the following years were much better. We cleared $6,000 net money after we met obligations in 1983, and my wife, Lisa, and I were able to furnish a small house and get married. She has a background in accounting so she eventually took over what my mother was doing and keeps up with all our bookwork.

When Dad started growing cotton in 1981, I remember him buying a two-row cotton picker. He put me on that machine, and I was responsible for getting a couple trailers a day. From that time on, I knew come October I was going to pick cotton, and he was going to take the rest of the labor to pick peanuts.

I began gravitating toward cotton and keeping up with how much we picked on each field. I still keep a lot of records today.

Prior to the Boll Weevil Eradication Program, we were spraying cotton with methyl parathion about every seven days. When the program began, boll weevil traps were placed around the field every couple hundred feet. And they would be full. I said, “This will never work.”

And then we were told we had to pay $35 an acre to fund the program, and the payment was due in August. Big money and bad timing. But we made it through, and eventually it worked.

My son, Edwin, farms with us and has some ground of his own, too. Seeing him get started and knowing someone is following in your bootprints is a blessing. One of Edwin’s first jobs was hauling cotton in the boll buggy to the module builder. His feet hardly reached the floorboard of the tractor.

Today, he is in charge of peanut planting and spraying all the peanuts and cotton. At harvest, he and I go to the peanut field together.

Edwin is expecting a son in December. If he decides to farm, he will be fifth generation. My daughter, Cayla, and son-in-law, Garrett Riden, have two daughters who also may choose careers in agriculture. If that happens, we will try to help them get started.

Last October, Cayla and Garrett had the opportunity to acquire a local soil analysis business in Shingler, just a mile and a half from our headquarters. At Lumpkins Balanced Nutrient & Consulting Lab, they pull samples, dry them, grind them and run the analyses. Then they put together maps and books for the grower and make fertility recommendations.

Everybody in the family is tied to agriculture in some way. Since we have been growing cotton, we have endured three hurricanes at harvest — Hurricane Kate in 1985, Hurricane Irma in 2017 and the never-to-be-forgotten Hurricane Michael in 2018. Based on our faith, we knew it was the Lord’s will, and he saw us through it.

But because of those experiences, we’ve gotten aggressive on the front end planting cotton so we can get it out as quickly as we can.

Nobody has a crystal ball, but we have to have faith that everything will work out as it should.