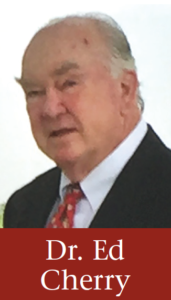 After many years of being asked by One Grower staff for a My Turn article, I relented and will try to give you readers some things to ponder.

I spent my career as a research entomologist with the University of Tennessee, Ciba-Geigy and FMC. These ventures put me in contact worldwide with some very important and impressionable people. However, before we get into these memories, let’s back up and see how this was made possible.

I began my life in Gainesboro, Tenn., a town of 900 and the county seat. My family was poor but proud and I went to grammar school there. A big break, if you call losing your mother a break, came and I moved to Nashville for high school. This opened the chance to go to college, and I went to Tennessee Tech wanting to be a dentist. However, organic chemistry got in the way and I wound up a biology major.

The summer before graduating I got a job for the U.S. Department of Agriculture running Japanese beetle traps. At summer’s end, the man in charge of Tennessee for USDA said they wanted to send me to grad school. I replied, “Have you seen my grades?” But they got me in and an M.S., PhD and postdoc later, I set out in the world.

Cotton and soybean research for the University of Tennessee in Jackson led to jobs with Ciba-Geigy and FMC directing product development worldwide. The time with FMC led my family to Philadelphia and living in Cherry Hill, N.J. When introducing myself there, the most-often asked question was, “How do you spell that, cuz, and where are you from with that accent?” I’d reply New Jersey, and then, oh, south Jersey.

I was sailing along when reorganization led me to Washington, D.C., to lobby for the Agriculture Department. This is where I began to interact with many of you who may be reading this article.

Along with the National Cotton Council, FMC began sponsoring the Producer Information Exchange (PIE) in 1989. The concept was to take cotton farmers from the four growing segments to visit their counterparts. As a lobbyist, I began traveling with all the tours not to sell or market our products, but to gain relationships beneficial to all involved. Two things among many that stood out were some growers who lived maybe only 5 miles from each other had never met until they went on this tour. The other thing I heard was, “This is the best thing I’ve done in my adult life,” — strong words from highly successful people.

I have met many people throughout my career who have aided my success. I don’t have time and space to list them all, but if you would indulge me, I want to mention three. Jim Burridge from D.C. took me under his wing and taught me how to be a successful lobbyist. I look to Bud Lindler from the Cotton Council as someone who should be the template for working with farmers. Ben Lamensdorf is a farmer and businessman who represents the leadership needed in agricultural affairs.
Now as I go to meetings in a retirement capacity, I am often referred to as “a former industry icon” and “the smartest man in America.” I can’t do anything to deny those comments but say thanks for the wonderful memories.

The best career move I made was to do a postdoc at Mississippi State University. As a tribute to MSU and the Women for Agriculture in Mississippi, a scholarship fund in honor of my late wife, Alma, and Pam Steele has been established through the B.F. Smith Foundation. These scholarships will go to women focusing on agriculture at MSU. We have had tremendous response from many people and thank them very much. If you are reading this and would like to contribute, please let me know.

For now, the No. 2 America’s guest Dr. Ed Cherry (I’ve always got a kick how we PhDs are treated as the little D when compared to MDs even though we took as many courses as they did) will sign off from BugDoc Farms in New Tazewell, Tenn.