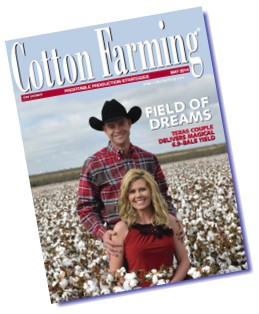 Producers in southwest Georgia have always been peanut farmers who grew cotton and corn, but the mainstay was and still is peanuts. When the 1985 Farm Bill became law, that enabled producers to build cotton base. In 1988, Georgia farmers also voted to approve the boll weevil eradication program and ushered in a new era in Georgia cotton. Slowly, the cost of production came down, as did the number of times we sprayed for the boll weevil, which dropped from 10 to 15 times to none.

The first few years were expensive, but it was worth it. Cotton exploded after the 1994 crop. Eighteen new cotton gins were built; and people invested heavily into the future of cotton. Peanuts were still first in the standings, but now cotton was running a hard second.

With the eradication program and evolution of Bt/RR cotton, both production and labor costs had decreased. In a lot of areas, cotton had once again become king.

In 2007, the corn market made its move, and corn became the new hot commodity. Irrigated producers in the Southeast adapted and responded to market signals. As the price of corn jumped, irrigated producers jumped to try corn, but without infrastructure or a “corn module,” a lot of producers gave up.

Dryers, elevators and bins, however, popped up all over the Southeast. In southwest Georgia, we even built an ethanol plant. The adage rang true that if cotton and corn had a “7” in front of the price, corn would win every time.

With the world turning to grains, the cotton global stocks plummeted to new lows. It was cotton’s turn to again be the highpriced commodity.

China had let its supply of bales dwindle down, and the world’s stocks-to-use ratio was the lowest it had been in years. Producers in southwest Georgia rushed back to cotton for another couple of years but kept grains as the price was also still good. The cotton price jump caused demand erosion, and textile mills switched to blends to try and keep their costs down and the volatility out of the picture.

China built a huge polyester industry, and it has since taken some of cotton’s demand. To this day, U.S. producers are in the fight of our lives to regain some market share. With cotton and grains in the spotlight for a few years, peanut acres were cut back. In 2011, acres were down 30 percent in Georgia, and the spring drought set us up for a disaster that nobody saw coming. Supply was short, and prices were high so the stage was set for good prices for the 2012 and 2013 crop years. Now our supply is back to a surplus.

The new Farm Bill raises several questions for all farmers in the Southeast. We are just beginning to understand and see how it differs from previous versions. We are trying to decide what commodity will be king for the next five years. Do we update yields? Do we update bases? Do we do both? What is a generic base, and how can it be used to benefit us for the next five years? The conference committee included the generic base in its final version, which is great for cotton farmers.

I hope everyone has had a chance to attend one of the National Cotton Council Farm Bill meetings. Learn the rules and then figure out how to plan for the next five years. Personally, I like to spread around the labor costs. The new way to harvest cotton certainly has changed our labor needs, but I think this crop will still remain king in most parts of Georgia.

However, if you throw up a cotton boll and peanut at the same time, I still have to catch the peanut first – but cotton will always be in my mix.