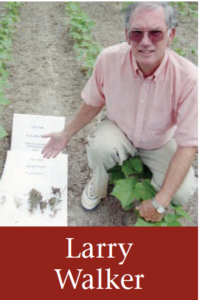 Four decades ago, Dr. Raymond Sheperd and I were standing in Field 10 in one of his cotton nurseries at the Auburn Plant Breeding Unit. I was a young experiment station superintendent, and I fussed about how short the cotton was. Sheperd was the U.S. Department of Agriculture cotton breeder at Auburn and was developing root-knot resistant cotton lines. He told me, “If you’ll look — really look at a cotton plant — it will tell you everything it needs.”

My dad and granddad had taught me how to work in cotton fields from the mid 1950s through 1964. In ’64, a miracle happened at the Shady Grove Farm — cotton was picked with a Ben Pearson cotton picker! A few years earlier, Karmex DL was applied as a preemerge herbicide for grass and weed control. It came in a 1 gallon paint can from DuPont, and I read everything on that label.

While my experiences at Shady Grove were “up close and personal” with hoeing and picking cotton, Dr. Sheperd taught me what a cotton plant really was — its physiology and schedule. During my five seasons as superintendent at the plant breeding unit, I managed the cotton variety test and used new technology, including Pix and pyrethroids. Pix helped with the cotton’s schedule, and the pyrethroids kept out worms and weevils, especially late season. We could actually make a top crop.

I went to work for Ciba-Geigy in ’84 in sales and later as a product development specialist in Mississippi and Louisiana. Ciba-Geigy had some old standards in the cotton market — Cotoran and Caparol — and was developing Dual and Ridomil. I worked with Dr. Will McCarty, who was the young Mississippi cotton specialist following Dr. George Mullendore.

By this time, DD 60s were being tracked and more emphasis was being placed on when peak bloom occurred. I introduced Ridomil for cotton seedling disease control and the use of Dual as a pre and over-the-top herbicide. When no-till acres grew in the late ’80s, these products helped protect the cotton plant and keep it on schedule.

I came back to the Tennessee Valley in 1994 when Tilt was introduced to the peanut market. Roundup Ready came to the cotton market in the mid ’90s. Monsanto’s position for Roundup was, “The only thing you need with Roundup is more Roundup.” But we found that Dual could help this herbicide. Even 25 years later, Dual and Roundup were used post on my cotton back home at Shady Grove.

For the first time since my plant breeding unit days, I had a sweep net, which was as critical as my four-wheeler. I’ve had the opportunity to fight Roundup-resistant weeds, grow cotton in the presence of neonic-resistant thrips, shoot for top yields with higher nitrogen rates and current varieties using Pix, and prepare a quality crop for harvest using Prep. I wish it was that simple.

At cotton pickin’ time, I still remember those people who could pick a lot of pounds per day — Carroll Campbell and P Nut Taylor in my younger days and Charlie Burmeister and Patrick Shepard from when they were young. These were cotton picking dudes, but I was just a dude who picked cotton.

I am thankful to have helped quite a few producers these past 18 seasons. I’ve been around and listened to some smart professionals, and more than a few times, they tolerated me. We got to “think outside the box,” and I was able to see this information “put on the ground.” From a grateful heart, let me say thanks. My great wife of 49 years, Maxine LaRue Walker, has been through all of this with me. John Bradley was right — I married up!