Greetings From The Farm

The Fickleness of Love 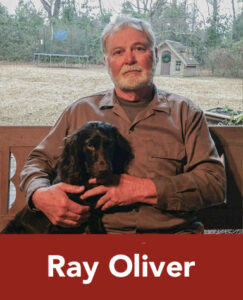 Editor’s Note: Ray Oliver’s My Turn column was edited for space constraints in the print issue of Cotton Farming. Here is his manuscript in its entirety.

I drove up to the barn one morning a few weeks ago and was greeted by quite a sight. Standing on the seat of my tractor, in all his finery, was a male peacock. Being that we don’t have peacocks on the farm, nor do any of my neighbors, the question begged, “From where in the world did this guy come?”

He hopped down and disappeared from sight around the corner. I didn’t want to spook him, so I went about my morning duties ignoring him. As soon as I let the laying hens out, and they ran over to the barn for their breakfast, he strutted into view in full display. If you’ve never seen a male peacock up close in full courtship fan, put it on your to-do-list, for it is breath-taking.

His underside is a dark indigo transitioning on his breast and neck to the Nassau Blue color of my high-school fantasy car, a 1963 split-window Corvette. His fan consists of at least fifty feathers of at least three feet in length, each dark green beginning at the base and becoming an iridescent green at the tip. Many have an “eye” of concentric circles of first black, then green, then brown with a blue center containing an indigo spot.

He’s able to direct these feathers into an acute angle pointing slightly forward enveloping himself in an emerald headdress with dozens of staring eyes. The crescendo comes when he drops down his caramel colored coverlets and begins drumming, sounding like the wind rustling autumn leaves.

It’s a show that could make the Wizard of Oz blush. As the objects of his effort, the hens were enthralled bobbing their heads back and forth and chirping among themselves. I’m not fluent in henspeak, but as near as I could translate it was to the effect, “Are you serious, what kind of rooster are you and who pimped your ride?”

After a minute or two, the hens went about their business never looking his way again. Not deterred, he fanned and strutted for them everyday for the next week until I was embarrassed for him.

That bird nearly beat me to death. Did I mention he has fifty tail feathers three feet in length?

Wife Nancy fell in love with him at first sight and I knew what was coming, “We’ve got to get him a girlfriend,” she said. I reminded her that she said exactly the same thing about “Cornbread” our donkey herd of one that now numbers ten, but I quickly recognized the futility of my pursuit as she rushed away to locate the current Department of Agriculture Market Bulletin.

Sure enough, I was busy the next day building a multi-compartment enclosure complete with a cozy roost for two and a large adjoining area suitable for courtship displays or a bachelor pad conversion in case things didn’t work out. We were off that afternoon to pick up a peahen that she found an hour away.

As soon as we released her in the pen, “Pretty Boy” (Nancy’s name for him, I thought he looked more like an Elvis or Liberachi) hopped back on my tractor and stared at “Pretty Girl” (I bet you saw that coming) for the rest of the afternoon. We left one end of the enclosure open hoping he would strut right up to her and introduce himself, but he was having nothing to do with that plan.

He did, however, strut a well-worn path around the pen the following three days. We felt that we needed to keep them shut-up at least through the breeding season or else the foxes and coyotes might kill them. On day four, son Les and I were watching him strut, and Les said, “You know, he can’t see a thing behind him when he’s fanned out like that.”

The light came on in my head, and although I knew it was a bad idea, I couldn’t resist the redneck urge to say, “Watch this,” as “Pretty Boy” quartered away from me. First, behind the tractor, then behind a post, and then with a momentum of mediocrity, I lunged, and grabbed him by the feet.

That bird nearly beat me to death. Did I mention he has fifty tail feathers three feet in length? With Les’s help, we did manage to get him in the pen where he was displaying within the hour.

The Fickleness of Love

“Pretty Boy” chased “Pretty Girl” around the enclosure for three weeks with an inspiring singleness of purpose, but to no avail. Peahens apparently are notoriously picky requiring much in the way of foreplay.

At last, his peacock equivalent of testosterone depleted for this breeding season, his interest waned and his beautiful fan feathers began to fall out. Wouldn’t you know it, on the afternoon that he lost the last majestic one, “Pretty Girl” started fanning her stubby little tail for him, chasing him around the pen.

There’s a metaphor here somewhere but to avoid the wrath of “Pretty Girls” everywhere especially the one living with me, I’ll let you write your own.

Popeye [singing] “You can bet your last nickel that women is fickle.” says Popeye the Sailor Man [toot toot].