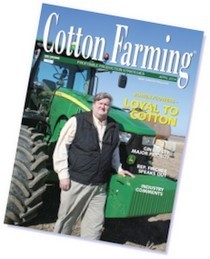 Five years ago, I was sitting on my tractor in the middle of a cotton field in Frog Jump, Tenn., when I received a phone call that changed my life.

I remember it like it was yesterday. One of my trusted friends asked me to run for Congress, something that this seventh- generation farmer had never considered.

I think back to that day on a daily basis, always remembering where I come from – just another farmer on a tractor trying to do his best to provide for his family. This was especially true as I worked on this year’s Farm Bill as a member of the House Agriculture Committee.

As a farmer, I knew it was past time for Cong-ress to pass and the President to sign into law a Farm Bill that would provide the certainty farmers across this country need. I am one of a few farmers in Congress who understands firsthand the impact and just how far-reaching a Farm Bill is to America’s farmers. Farm Bill legislation not only sets in stone important farm policies, but it  affects the food supply and grocery prices for every American household. It also tells  farmers what to expect from our farm programs.

Reaching a consensus on the Farm Bill was a long time in the making. After months of debate and negotiations, the House and the Senate finally agreed on a Farm Bill, which the President signed into law in February. Since then, I’ve taken the opportunity to travel across Tennessee and neighboring states on my Heartland Farm Tour, where I’ve talked to hundreds of farmers.

In the new Farm Bill, owners of a farm can retain base acres, including generic base acres (the old cotton base), or reallocate all based acres, other than generic base. If you fail to do this, you’ll retain your existing base acres.

There’s also a new areawide, group-risk crop insurance policy specifically for cotton producers called Stacked Income Protection insurance (STAX), starting in 2015. STAX can be purchased in addition to traditional crop insurance to cover the deductible or as a stand-alone policy. It is similar in design to the existing area plan you may be familiar with called Area Revenue Protection (ARP) and will be available in all counties with cotton production or in larger geographical areas for counties that lack enough data.

Because STAX replaces major farm programs for upland cotton producers, it will not be in place for the 2014 crop year, and producers will receive a transition payment for 2014. A smaller transitional payment will be made for 2015 for areas where STAX is not available. Needless to say, agriculture has always done more than its fair share to address the deficit. This Farm Bill was no exception, saving taxpayers more than $23 billion overall. It ends direct payments to farmers, opting instead for a crop insurance system, while eliminating nearly 100 dup-licative programs.

But the most important thing I can tell you about the Farm Bill is that to succeed in farming over the next five years – you must lean in. While there’s no such thing as a lazy farmer, there’s a necessity with this Farm Bill not to sit back, but rather to lean in and be proactive.

In the weeks and months ahead, you’ll be faced with choices among the new programs. Some of those decisions cannot be changed for the next five years through the duration of the law, making it important that you ask questions now and decide what’s best for you and your farm operation.

Now’s the time to talk to your FSA and crop insurance agent. You need to understand the ins and outs of this law and how it will affect you and your farm. You can’t wait to do these things later; it’s going to start affecting you now.

While the Farm Bill is far from perfect, it’s a step in the right direction as it creates much needed certainty for our agriculture community.