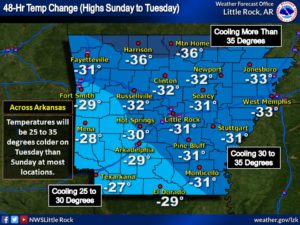 After a mild weekend of sunny skies and temperatures in the high 50s, much of Arkansas found itself dealing with widespread rains and falling mercury throughout Monday. Tuesday, Nov. 12, the state awoke to a morning that declared itself as “winter” in no uncertain terms.

The National Weather Service described Little Rock’s post-sunrise temperature as “22, feels like 9” degrees Fahrenheit, something that Jarrod Hardke, Extension rice agronomist for the University of Arkansas System Division of Agriculture, said isn’t especially helpful when you’re sitting in the cab of a tractor.

With “wind chill” as the go-to caveat to explain the vast difference between the thermometer reading and the shock of the felt weather across the state, many row crop farmers could at least find some comfort in the fact that much of the 2019 harvest had already drawn to a close. A U.S. Department of Agriculture report published Tuesday afternoon put the state’s rice harvest at 100% complete — something of a miracle, considering the crop has been delayed in one way or another at every turn of 2019.

“There’s no real harm to rice left in the field,” Hardke said, although a complete shutdown of the biological processes of any unharvested rice would mean the plants would collapse upon themselves sooner or later.

The USDA report listed the state’s cotton acreage as 91% harvested, nearly on par with the five-year average for this point in the season. Bill Robertson, Extension cotton agronomist, said the cold temperatures wouldn’t be likely to affect fiber yield or quality, and that this year’s crop has actually proven remarkably resilient, given the sheer amount of rainfall the state has received over the course of the season.

“I’m surprised how well the color has stayed so white on the cotton, even with the rain we have gotten through harvest,” Robertson said. “The biggest thing with the cold weather is the fact that some type of antifreeze is needed in the water system on the picker. Not a big deal.”

Some of the state’s fruit production may prove vulnerable to the extreme temperatures, however. Amanda McWhirt,
Extension fruit and horticulture specialist, said that while strawberries and peaches are typically very cold hardy when fully acclimated and dormant, the timing of the cold snap may prove injurious.

“Unfortunately, neither of these crops are likely in the fully dormant stage or fully acclimated,” McWhirt said. “Depending on the local temperatures and conditions there may be some reductions in yield, winter dieback or even plant death. “The large temperature dive from the weekends temps will likely be a major contributing factor to damage occurring. We will have to wait to see what happens next spring to know the full extent of what injury, if any, may have occurred.”