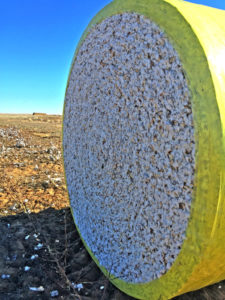 Robinson said this decline followed two years of good prices for Texas growers. Cotton prices experienced some upticks this season but were still not at a profitable level for many Texas producers.

According to AgriLife Extension planning budgets, producers in most areas of Texas need cash prices to be at least 70-75 cents per pound to cover their costs.

“That’s just higher than where we are at price-wise right now,” he said. “There may be some opportunities for some increases, but market indications show even more downward pressure on 2019 cotton prices.”

Trade with China continues to add uncertainty to U.S. cotton prices, but other market forces have been working against cotton. Good prices in 2017 and 2018 led to expansion of cotton acres, and a boon harvest nationally resulted in ample supplies amid already low prices.

Meanwhile, economies around the globe, including the U.S., have slowed, meaning less demand for textiles, Robinson said.

China continues to purchase some U.S. cotton despite a 25% tariff, but Brazilian cotton has taken a bite out of historic U.S. market shares there, Robinson said.

Robinson said resolution to the U.S.-China trade dispute might cause a price increase, but supply and demand levels likely indicate a significant rally will not come.

Robinson said there could be a silver lining to low prices this season for Texas cotton growers – fewer acres nationally in 2020. Production could be down more than 3 million acres in other parts of the country as growers look to more profitable crop options like corn or soybeans.

U.S.-China trade will factor into soybean acres, but Robinson believes lower cotton supplies in 2020 could initiate the price rally Texas growers need to turn a profit.

“There’s really not much positive to look at this year, but there might be an opportunity in ’20,” he said.