Dr. John Robinson, AgriLife Extension cotton marketing specialist, College Station, said cotton and the industries that touch it are sliding alongside the economy. 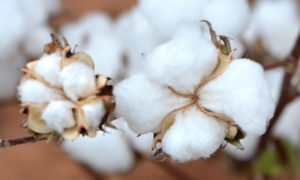 Two contributing factors have been bad for sales of retail apparel and trickled down to cotton markets, Robinson said.

Second, gross domestic product, which measures the value of all final goods and services produced, is negative in the United States and globally, indicating a recession. Millions of Americans have lost their jobs, the economy slowed, and people are spending their money on necessities rather than discretionary items like clothes, he said.

Robinson said during recessions, consumers will often shift spending on food to buy cheaper items like ground beef versus a ribeye steak. But a recession makes the cotton market especially sensitive to economic booms and busts.

“Historically, if you plot a recession, cotton consumption moves together alongside it,” he said. “When times are tough, clothing is discretionary. People will put off buying new clothes until times are better. That makes cotton more vulnerable than any other ag product I can think of.”

Robinson said the export market has been “decent enough” but suspects those numbers are being propped up by China. The Chinese government supports cotton prices by buying up reserves.

“They ordered 100,000 bales of cotton,” he said. “But they’re just holding them. At this point they’re not spinning them into yarn.”

A major apparel producer like China holding a glut of U.S. cotton worries Robinson about the 2020 season and 2021 marketing year. Reduced demand going forward will likely reflect in slower export sales in 2021.

The cotton acreage estimates won’t be updated until June, but Robinson said expectations are that the number will be closer to 12 million-13 million acres. The USDA reported cotton farmers planted 13.7 million acres in 2019, a 3% reduction from 2018.

Beyond the pandemic response

Despite the reduction in acres, the expectation for 2020-21 is that the United States will have more cotton than it needs. Futures market prices, which have ranged between 48 cents per pound to 58 cents per pound in the past few months, will likely not improve.

By comparison, the futures market price for 1 pound of cotton was 70 cents in January, Robinson said. According to AgriLife Extension budget calculations, most farmers’ break-even price, which is the cotton cash price needed to cover input costs alone, is 60-70 cents per pound, depending on individual costs and eventual yield. Cash prices generally fall 4-8 cents below futures market prices.

“If we end up with excess cotton, it will continue to trade in that low range, because I don’t see any fundamental economic reason for it to rise,” he said.

Robinson said federal price support mechanisms, along with additional funding from the Coronavirus Aid, Relief and Economic Security Act, should get farmers to next season.

He believes the lag, both in economic and logistical terms, could mean cotton markets won’t return to normal until Christmas 2021, if COVID-19 is controlled beyond the initial outbreak.

“If we have a vaccine and all the assurances that we’ve got it licked medically, we might see the economy start picking back up at a rapid pace,” he said. “There has to be demand for products, and the lag will likely take months when you’re talking the global cotton supply chain and people having confidence and ability to spend money. The last thing on an unemployed person’s mind is new apparel.”