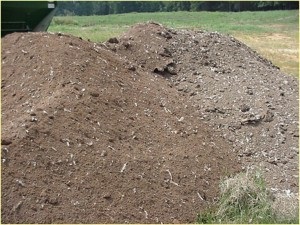 A small stack of poultry litter — photo by Larry Oldham

It is time to once again review using poultry litter, aka broiler litter, to fertilize row crops. Many growers now have their own experiences, so this should be a reminder.

Prior to the last 10 to 15 years, poultry litter was primarily used to fertilize hay and forage crops in fields near the production facilities. Interest and use by row-crop producers increased exponentially when inorganic fertilizer prices went into a volatile period around 2008.

Mississippi ranks among the top five states in both numbers of broiler chickens grown and quantity of meat produced, so litter is available. However, since production is located mostly in the south-central region of the state, the logistics of getting it from there to the row-crop growers led to a broker system that, anecdotally, seems to work.

There are several considerations for including poultry litter in the row crop nutrient program.

How much is it worth?

The value of litter as a fertilizer is determined by the open market factoring in nutrient contents, demand, supply, transportation, storage, competitive products and other factors.

The Best Management Practice is a current analysis of the litter used. Analyses can be done by the Mississippi State Chemical Laboratory or commercial laboratories. More information on this process is available at: Basic Soil and Litter Testing.

Why does cost so much to get litter from the poultry region to a row crop field?

Can litter be stored until I need it?

Storage of litter is important as timing of litter clean out and application to fields is not always well-calibrated. Many poultry growers have covered dry stack sheds to store litter; however, farmers acquiring litter from a grower or broker may need to temporarily store it.

Litter should be covered while stockpiled on the ground, and there should be no hydrological link between the litter and any nearby water, i.e. a berm must be placed around any outside storage area.

Stacking litter in fields for more than a few days is not recommended. The litter loses mass while sitting which increases P concentrations. Nitrogen is lost from both covered and uncovered piles, but 50% more is lost in uncovered piles. Potash concentrations decrease from leaching out if exposed.

What equipment is needed to apply litter to my fields? 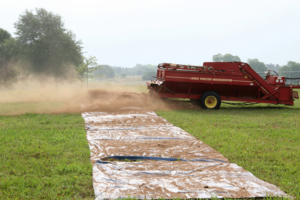 Proper spreading equipment is necessary and should be calibrated and maintained regularly. MSU guidance for Calibrating Litter Spreaders is available.

When should I apply litter?

Litter is most effective when applied close to when the crop will use the nutrients. Conversion of nitrogen in the litter to plant available forms, whether nitrate or ammonium, will begin one to three weeks after application.

Litter is most efficient when applied a few days before planting row crops. Each year, only about 50% to 60% of N applied in spring-applied litter is used by most crop plants.

Research in north Mississippi found that with no actively growing cool season crop, fall-spread litter provided no N to the next season cotton crop. However, rice only uses about 25% of poultry litter N in the year of application.

Significant amounts of the P in the litter applied in the spring and practically all the K in the litter is plant-available from spring applications. Phosphorus applied in excess of the amount used by plants will be stored in the soil. No carryover credit can be given for litter K to subsequent crops.

How much litter do I use?

The only location that did not result in an advantage for broiler litter over standard inorganic nitrogen fertilizer was a Dubbs silt loam soil near Cruger, Mississippi with a 3-to 4-bale yield potential for cotton.

The most effective application rate of litter as cotton fertilizer is 2 tons per acre applied a few days before planting, and then sidedressed with an additional 60 pounds of inorganic fertilizer N.

This calculates to 155 pounds N applied per acre using average nutrient contents. However, if about 96 pounds of N is added in the preplant litter application, half of that amount or 48 pounds of N is the plant available quantity in the course of the growing season.

Another 60 pounds N should be sidedressed using inorganic fertilizers at layby, thus the net application rate is 108 pounds of N per acre from both sources that will be used during the growing season.

Further work has shown that because litter provides all nutrients, it may be difficult to decide which limiting nutrient(s) was alleviated by the litter application. The Cruger location demonstrated if soil-based nutrients do not limit production, litter and inorganic nitrogen are roughly equal. Therefore a sound soil testing program is necessary to insure balanced plant nutrition.

Are there environmental considerations?

Other states have suggested restricting litter applications to row crops to the quantity needed to supply enough phosphorus for the current growing season. Mississippi research has shown that soil test phosphate builds up over time with repeated, multiple year application of litter.

If higher soil test phosphate is a concern in the row crop field, ask for an environmental risk assessment from the local office of the Natural Resource Conservation Service or a certified technical service provider. Interpreting this assessment determines field-specific proper litter application rates.

Is litter a lime?

There is significant calcium in litter from bird feed; however the soil pH response is not sufficiently predictable to be a recommended liming material.

Why is the litter fertilized cotton paler than the other cotton fertilized with UAN?

Nitrogen in poultry litter is in organic forms that must be converted to plant-available forms via biologically mediated processes. Nitrogen in inorganic fertilizers such as UAN are plant-available about as soon as they dissolve in the soil.

While the quantity of nitrogen from each is the same, the amount that the plant roots see in one case is a single big gulp versus sipping a straw in the other. The real question is how much will it yield in October, and research has shown that higher chlorophyll readings in-season did not lead to higher yields in litter/inorganic comparisons.

With the fertilizer content of the litter and calibrated spreading equipment, application rates using litter can be calculated. Remember only about 50% of the N in the litter will be available to most agronomic crops during the season of application. Rice will use about 25%. Do not plan for N from fall-applied litter.

What about the weeds?

In some cases, it seems there are more weeds where litter is used. A number of studies across the southeastern poultry production region found no weed seed in litter.

If more weeds seem to occur, likely it is due to improved germination conditions for existing weed seed banks because of the litter application.

Six studies in Mississippi have shown that broiler litter can provide enough nutrients at two tons per acre applied shortly before planting cotton, and supplemental sidedressing of 60 pounds nitrogen per acre at lay-by. Litter has distinct properties that must be considered in the economics of transportation and application.

It is always best to have a recent nutrient analysis of the actual litter used. A sound soil-test based program for soil fertility management is required to maximize the overall efficiency of litter used as fertilizer.