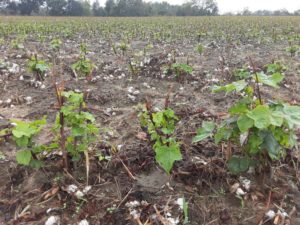 The second week of November has finally brought cold temperatures to the Florida Panhandle, something needed to kill regrowth in cotton fields. The past several years, we have had increasingly warm winters with few to no hard freezes.

As a result, pest populations that would have otherwise diminished during the winter have remained at high levels. Host plant survival and availability has allowed insects to continue their life cycles from fall harvest, though the winter, and into a new spring crop.

Cotton is a prime example of a host plant that will put on regrowth after harvest or even mowing, if left unchecked. This regrowth provides a living host and tissue for pests such as aphids, whiteflies, foliage feeders, and nematodes to thrive on during the winter months.

The green plants allow a continued host for pest populations, carrying them all the way to the next season when the next crop is being planted. Post Hurricane Michael, the end of the 2018 cropping season was a perfect example of what can happen when plants are not destroyed.

Many growers were unable to manage fields after the hurricane, let alone kill plants and regrowth. During the 2019 season, growers noticed higher pest issues than normal, especially nematode injury in some fields. In a normal year when plants are killed, there are limited host plants in the field to maintain pest populations. Without host plants, pest numbers naturally decline over time.

Nematodes are a prime example of the importance of killing regrowth in cotton. As long as the plant has a living root system and tissue, nematodes can complete their life cycle and maintain populations in the soil. As previously stated, nematode populations will remain as long as there are viable roots; if regrowth is not killed viable roots can remain until the subsequent crop is planted.

For this reason, it is best to offset from the rows of the previous year at planting. Research has shown nematode levels are much higher when planting back into the previous year’s row versus offsetting to the row middles. This can be more problematic in conventional tillage situations; after a field is tilled, the rows from the previous year are no longer clearly visible, increasing the likelihood that they are reused by coincidence.

In a strip-till or conservation tillage scenario, the stalks are typically still in place and planting off center is much more intuitive. While offsetting rows is always recommended, it is very important if regrowth is not killed.

With harvest well under way and many farmers already finished, mowed cotton fields (many with considerable regrowth) are visible from the roadways. Hopefully the cold weather will continue, and we will have a series of freezes to ensure regrowth in the fields die, eliminating this vital host from pest species this winter.

If not, herbicides and defoliants should be used to terminate fields and kill regrowth.

Ethan Carter is the University of Florida Institute of Food and Agricultural Sciences regional row crop integrated pest management agent based in Jackson County, Florida. He can be reached at ethancarter@ufl.edu