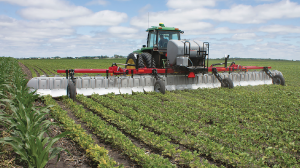 May 25 marks the last day for Arkansas growers to apply the herbicide dicamba to crops in the state, based on a ruling from the Arkansas State Plant Board earlier this year.

The herbicide is primarily used to control Palmer amaranth, commonly known as pigweed, in soybeans and cotton that have been genetically modified to tolerate the chemicals.

Although various formulations of dicamba have been in use for many years, its use attracted national attention when the Arkansas Plant Board received more than 1,000 complaints of herbicide damage in soybeans and other crops in 2017, many of which were believed to be caused by neighboring growers’ application of off-label dicamba formulations to their own dicamba-tolerant crops.

After the Plant Board initially declared an emergency ban on all use of dicamba in June 2017, the board later amended its ruling to institute an April 15 in-crop cutoff date. In February, the board voted to extend that date to May 25, along with introducing several other caveats:

• A 1-mile buffer around university research stations, certified organic crops and specialty crop producers with 1,000 plants or $25,000 in annual sales

• A ban on tank-mixing dicamba and glyphosate

• A 0.5-mile buffer around non-dicamba-tolerant soybeans

• Fines for egregious violations of rules regarding the application of dicamba or auxin-containing herbicides were increased from $1,000 to $25,000 per instance

Arkansas producers were expecting to grow more than 3 million acres of soybeans and about 580,000 acres of cotton in 2019, according to the National Agricultural Statistics Service.