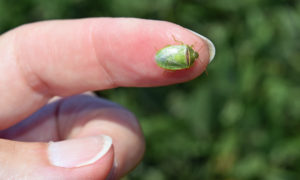 “We haven’t been cold enough so prepare for red-banded stinkbugs if you are growing soybeans,” AgCenter entomologist Sebe Brown said.

Louisiana has experienced the second year in a row with no real winter, and Brown predicts large populations of redbanded stink bugs and other species of plant bugs overwintering and finding plenty of alternative host plants in the fields on which to feed.

Brown urged growers to use high-quality seed treatments in all agronomic crops to boost yield and preserve quality.

“Over time, these insecticides do pay for themselves and are a good investment,” he said.

A new technology in Deltapine cotton could potentially eliminate the need for a seed treatment against thrips once it becomes available in the next few years, he said. 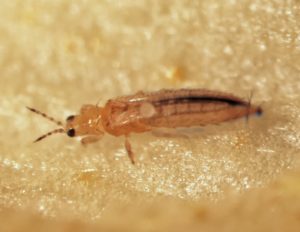 “Thrips are the No. 1 early season pest issue in Louisiana for cotton, and where this product excels is in thrips control,” Brown said.

While no silver bullet, the new cotton trait called ThryvOn will offer good activity on plant bugs and help by cutting down the number of insecticide applications needed through the growing season, he said.

Brown said a robust ear protection for corn earworms is not needed in the Mid-South, citing the importance of protecting cotton production.

“It is a recipe for disaster,” he said.

Brown said 95% of corn earworms will funnel through corn first before moving into cotton, and using the same Viptera genetic traits in both crops increases exposure of corn earworms to the technology. This, in turn, leads to increased selective pressure and potential resistance.

Miller recommended producers add a residual mode of action herbicide for burndown at six weeks or more from planting to prevent weed emergence, provided 30% or less ground cover from winter weeds exists in the field for maximum results.

For growers able to get in the field for early stage corn planting in late February to mid-March, yield can be maximized with only one post-emergence herbicide application beginning at the V2 or V4 growth stage, he said.

“When we start delaying things and with higher soil temperatures signaling earlier weed emergence to compete with the emerging crop, you’ll have to have both pre- and post-applications out there,” Miller said.

He urged growers to always include a residual herbicide in each application, including burndown, to increase long-term effectiveness and aid in weed resistance management, regardless of what weed technology trait is used.

“Never let your opponent get off the mat – that’s what we want to do with these resistant weeds,” Miller said.

The LSU AgCenter contributed this article.