NASS Acreage Report Out — Arkansas Cotton, Soybeans Up For A Recount 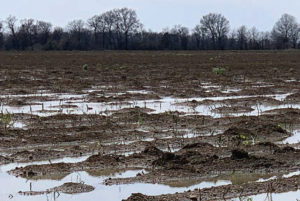 Wet ground beginning last fall made it difficult for growers to prepare field and plant this spring.

The strangeness of Arkansas’ rain-soaked planting season sloshed over into Friday’s National Agricultural Statistics Service Acreage report, with the agency saying it would be collecting additional information on the state’s soybeans and cotton.

NASS said that in July, it would collect information on crops in 14 states, including a recount on soybeans and cotton in Arkansas, since neither had reached 100 percent complete in planting when the acreage report was issued.

“Excessive rainfall had prevented planting at the time of the survey, leaving a portion of acres still to be planted,” NASS said Friday, adding that if new data justified changes, updated acreage estimates would be published in the Aug. 12 Crop Production report.

The last time NASS had to go back to the fields for information was in 2015.

Jarrod Hardke, Extension rice agronomist for the University of Arkansas System Division of Agriculture, said he could see this coming months ago.

“Starting back in January, I felt this was going to be the hardest year in recent memory to predict,” he said. “And then the year got worse.”

“This would be the fourth year of increasing cotton acreage and the highest planted acreage since 2012, when Arkansas had 595,000 acres,” Stiles said.

Extension Cotton Agronomist Bill Robertson said that according to the Arkansas Boll Weevil Eradication Program, Arkansas growers enrolled 583,770 acres, just above NASS’s report. “This number could change some as a result of flooding,” he said.

Hardke said he thought the number of acres was high.

“There are plenty of areas in the state that had high prevented planted acres,” he said. “Based on conversations with growers, I still feel like our total rice acreage number will be about 1.1 million.”

“There’s so much variability out there in what happened in small regions of the state and how much they were impacted by the weather and what percent they were able to get planted,” Hardke said.

He was also predicting a record high number of prevented planting acres for rice when then numbers come out in August. The previous record was 302,000 and change in 2013,” he said. “We’re going to beat that number.”

“With soybeans not providing an economical alternative, growers continued to plant rice,” Stiles said. “When the calendar flipped to June there were indications that folks weren’t through planting their intended rice acres.”

CORN – Corn was estimated at 810,000 acres, down from the 830,000 acres in the March report. Scott Stiles, Extension economist for the University of Arkansas System Division of Agriculture, said the corn acreage “was a surprise to me. I really thought we’d be down below 700,000 and about unchanged from last year.”

Based on the Friday report, this would be the highest corn acreage for the state since the 880,000 reported in 2013.

“I think a strong price rally in corn encouraged growers to keep planting later than normal,” Stiles said. “From mid-May to mid-June, September corn futures rallied over $1 per bushel –trading up $4.68 on June 17.”

PEANUTS – “NASS delivered the peanut acreage we were expecting in March — 45,000 on Friday versus 25,000 indicated in March,” Stiles said.

Travis Faske, Extension plant pathologist for the Division of Agriculture, said an increase of “approximately 20,000 acres over last year was due to the new peanut company, Delta Peanut.” Delta Peanut was planning to build two buying points and a shelling plant in Arkansas.

SOYBEANS – Extension Soybean Agronomist Jeremy Ross said he wasn’t surprised by the 3 million acre figure. However, “it is shocking to see the number of fields across the state that have bare ground with no crop planted,” he said.

On Monday, NASS estimated that 89% of the Arkansas soybean crop has been planted.

“Producers can still make a soybean crop with July planted soybean, but time is running out,” he said “Compared to the optimum planting date, we have already reduced our maximum yield potential by 25-30% with late plantings. Every day we delay planting is reducing the yield potential.”

Ross said another concern was that planting soybean maturity groups IV and V, much later than mid-July would run the “risk of not being fully mature by the time we typically have a frost in late October to early November.”

Stiles said that “as recently as mid-May, November soybean futures were trading down at $8.15 per bushel – at decade lows. Slow export demand and record large supplies have kept basis levels weak.”

“The market hasn’t had to encourage growers to plant soybeans,” he said. “Progress on trade talks with China has been slow as well. That continues to be an overhang on the soybean market.”

The soybean acres were the lowest since the 2.85 million planted in 2007.