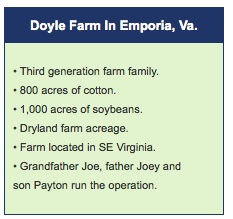 Can torrential rains keep a cotton crop from surviving and delivering any kind of yield? If you had talked to the Doyle farm family in Emporia, Va., last July, you would have heard that question.

As a matter of fact, the weather situation was so bad in the southeastern part of Virginia that Payton Doyle and his father Joey were ready to plow up some of their fields. The young cotton plants looked terrible.

In retrospect, it’s good that such a drastic measure wasn’t taken. In July, a field battered by heavy rains somehow recovered – much to the amazement of the Doyle family, including grandfather Joe and outside observers.

According to Payton, it took an unusual combination of events for this miraculous recovery. First, there was the faith that the Doyles had in PhytoGen’s PH 499 WRF variety planted on this particular field. Then there was the aggressive foliar feeding of the crop. And, finally, the weather improved, giving the plants a chance to capture heat units and recover.

A rainy spring delayed planting in the Tidewater region of Virginia. In fact, it was the third week of May before cotton planting was concluded. On the day after planting, the area received another four to five inches of rainfall. A day later, three more inches of rain hit the farm.

Later in the fall, this particular cotton field yielded 1,100 pounds. Other cotton on the dryland farm didn’t fare well, but the PH 499 WRF defied the odds and actually could have yielded 1,300 pounds if it had captured a few more heat units.

“I have never seen a year where we had such bad weather,” says Payton. “We have dealt with hurricanes in the past, and that kind of event will certainly cause hardlock. But we had never dealt with this much rain.

“This field looked so bad that I didn’t want anybody to see it. I would have hated if somebody had driven by that field and looked at it.”

Payton and his father have good things to say about the PH 499 WRF variety’s potential to mature quickly. But they also believe that intense management contributed to this cotton’s turnaround.

They treated the seed with Amplify D, which gives the seed more energy. A timely plant growth regulator application also helped. The foliar feeding was beneficial, and when the plant reached 10 inches in height, “it just took off,” according to Payton. Father Joey echoes those feelings even though he initially had his own doubts about whether the cotton could survive.

“Like Payton says, we talked about it, and decided we would hang in there with this cotton,” says Joey. “Wherever we had standing water, we had problems, but this is a Cinderella story. It had a happy ending.”

The Doyle family doesn’t have a consultant or farm manager. The grandfather (Joe), father (Joey) and son (Payton) run all facets of the 1,800-acre operation – which consists of 800 acres of cotton and 1,000 acres of soybeans. Joey’s grandfather Jim also farmed this land before it was handed down to the next generation.

So what did the Doyle family farm operation learn after such an unforgettable 2013 season? Obviously, weather dictates everything. But it also helps to have faith in a particular cotton variety. And, as Joey says, it helps to be able to “communicate with the rest of the family before reaching a decision.”

That was also apparent to a young county Extension agent in Emporia named Brittany Council who has worked with the Doyle family for two years.

Not only has she worked with the Doyles on test plots on their farm, but she observed the miracle event of last summer.

“The Doyles really know how to communicate with each other,” says Council. “That might be one of their secrets. Plus, they always look at the big picture. They didn’t plow up that field last summer, and I’m really proud of them.”