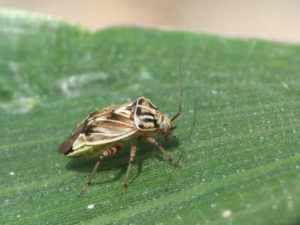 The season’s early onset of drought-like conditions has several insects on the move early. Plant bugs and stink bugs are moving from their wild host plants into cotton earlier than farmers usually expect.

Alabama Cooperative Extension System entomologist Ron Smith says the plant bug situation is not one producers are unfamiliar with, but earlier action will be required to keep damage under control.

While plant bug infestations have historically been more prevalent in the northern third of the state, populations may vary from year to year and occur all over the state. More serious damage is apt to occur in July, as well as in June.

Tarnished plant bugs generally move to cotton from surrounding hosts in early to mid-June to begin laying eggs and feeding. Without control, several generations can occur in a cotton field during the growing season.

Smith says the numbers of plant bugs migrating to cotton are enormous for this time of the year. A movement like this will pose serious production issues if treatment action is not taken.

“Drought early in the season dried host plants and pushed the plant bugs into cotton where they will feed on pinhead squares,” Smith says. “At this point, there are also stinkbugs waiting on the first bloom to drop so they can feed on the tiny bolls.”

Stinkbugs survived the mild winter in strong numbers. There are large numbers currently in corn where they may cause heavy damage.

Smith says plant bugs feed on pinhead squares just as they form. This causes them to dry up, turn dark brown and finally fall off of the plant. With frequent and continued feeding by large numbers of plant bug adults, a tall, spindly plant with no fruit is the result.

“Plant bugs are very economic cotton pests when dealing with them in the numbers we are currently seeing,” Smith says.

Producers should begin by scouting the earliest planted cotton. The cotton is lush, with better shade and more fruit.

“Scout fields planted through mid-May first,” Smith says. “Scouts and consultants are catching adults with sweep nets. This is the most effective way to catch and identify these insects.”