Under the right conditions, cover crops are a tool for improvement. After harvesting a crop like cotton or grain sorghum, a cover crop rotation can increase soil organic matter, recycle nutrients, prevent erosion and suppress weeds.

Even though farmers and ranchers across the Southeast have seen these benefits and moved towards cover cropping systems, several factors have limited their adoption in Southern Texas.

“One of the reasons why we haven’t seen as much cover crop adoption in parts of Southern Texas is because some farmers still rely on heavy cultivation. Incorporating the cover crops eliminates some of the additional advantages compared to leaving it on the soil surface,” said Spencer Samuelson, a field scientist for Corteva Agriscience and recent graduate from Texas A&M University.

Even with minimal tillage, some farmers avoid cover crops because they believe that cover crops can steal moisture from the next cash crop. Others are concerned that cover crops do not provide enough benefit to justify the additional cost or that they are simply too much extra effort.

Initially, the cover crops were divided into two groups, summer and winter. For each group, 13 species were selected as potential cover crops for the region. The summer group was planted in late August following a corn crop while the winter group was planted in mid-October after harvesting cotton. Growth rate, biomass, weed suppression and soil moisture dynamics were used to identify the best-performing cover crops for each group.

Out of the summer cover cropping system, sorghum-sudangrass, buckwheat, cowpea and sunn hemp were selected. For the winter group, Austrian winter pea, shield mustard, oat and triticale were the ideal performing cover crops. These eight species moved to the next phase of testing, where further research was conducted to observe the impact of planting time and termination date.

With all species planted in randomized blocks with four replications, a split-plot experiment was established to study the impact of planting date on summer cover crops and termination date for winter cover crops. To simulate a realistic farming scenario, rainfall was the only water applied to the test plots.

A soil moisture probe collected data every 10 centimeters to a depth of 40 centimeters. Within each plot, two 1-square-meter quadrants were established to monitor the emergence of weeds in the cover crop and subsequent cash crop.

After harvesting corn, summer cover crops were planted at three times: late August, early September and late September. An early frost terminated the cover crops in the summer group by Nov. 18. Biomass was measured in each plot immediately following termination and prior to planting the next corn crop to assess the amount of decomposition over time.

For the summer cover crops, weather was a significant factor. Dry conditions limited the growth of the early-planted crops to the point that they showed similar biomass to the middle-planting group at termination.

The early frost also reduced the amount of biomass produced by the late planting group. Despite these challenges, useful information was gathered from the study.

Regardless of growing conditions, weed pressure was lower in all cover crop plots than the control plot. Sorghum-sudangrass showed the most weed suppression across all planting dates, although it had the highest water requirements and had the greatest impact on soil moisture.

Buckwheat showed promise as a late-planted cover crop for its ability to grow fast and mature quickly.

“For the summer cover crop species, the earlier you can get stuff planted the better,” Samuelson said. “As cooler temperatures become more prominent, growing degree days will taper off and biomass won’t accumulate as rapidly.  As soon as a frost comes, most summer cover crops have poor cold tolerance and will be naturally terminated.  I would recommend to get the summers planted as soon after corn or sorghum harvest as you can feasibly get into the field.” 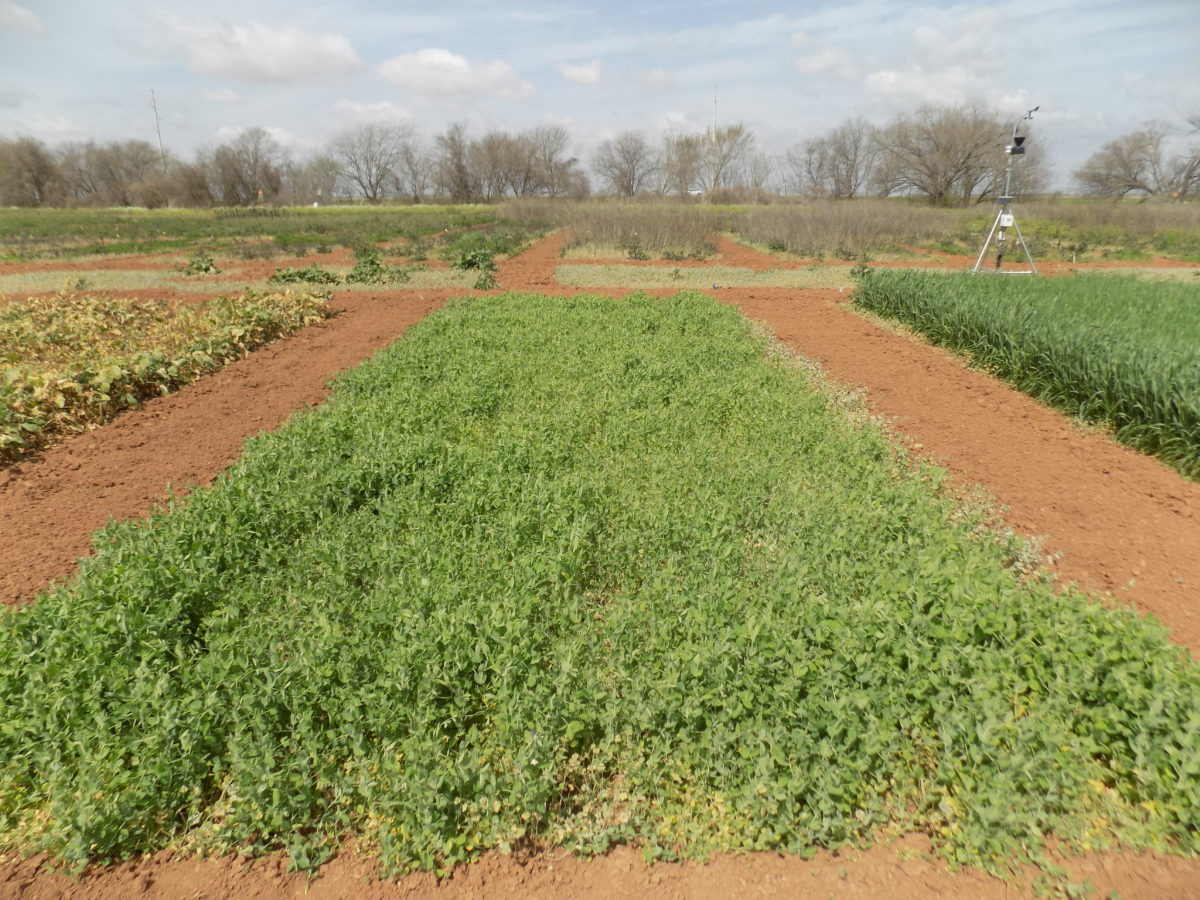 Winter cover crops were handled differently to accurately represent how a farmer or rancher would utilize them. Termination date was the major factor tested in the experimental plots.

Although the winter cover crops experienced drastically different environmental conditions in the two locations where the studies were held, high cover crop biomass was seen across all four species.

Triticale showed the largest increase in biomass between plantings and produced 300% more biomass when comparing its early-terminated group to the late-termination group. This allowed it to have the highest levels of weed suppression when terminated two weeks prior to planting.

Soil moisture dynamics play a critical component in a healthy cover crop rotation, particularly during planting. Although early and middle termination groups had a negative impact on soil moisture at the time of planting, this difference was less than 2%. Additionally, late-terminated cover crops offered the ability to hold soil moisture content late into the cash crop season by covering the soil surface and trapping moisture. Triticale offered twice the available soil moisture than the weed-free control group late into the season.

Mustard plants are a common host for false chinch bugs. These pests appeared in the late-terminated shield mustard and had a negative impact on the cotton stand.

However, the cotton yield across all groups was comparable to average yields for the region. The added nitrogen from the Austrian winter pea allowed its plot to have the highest yield in the study. 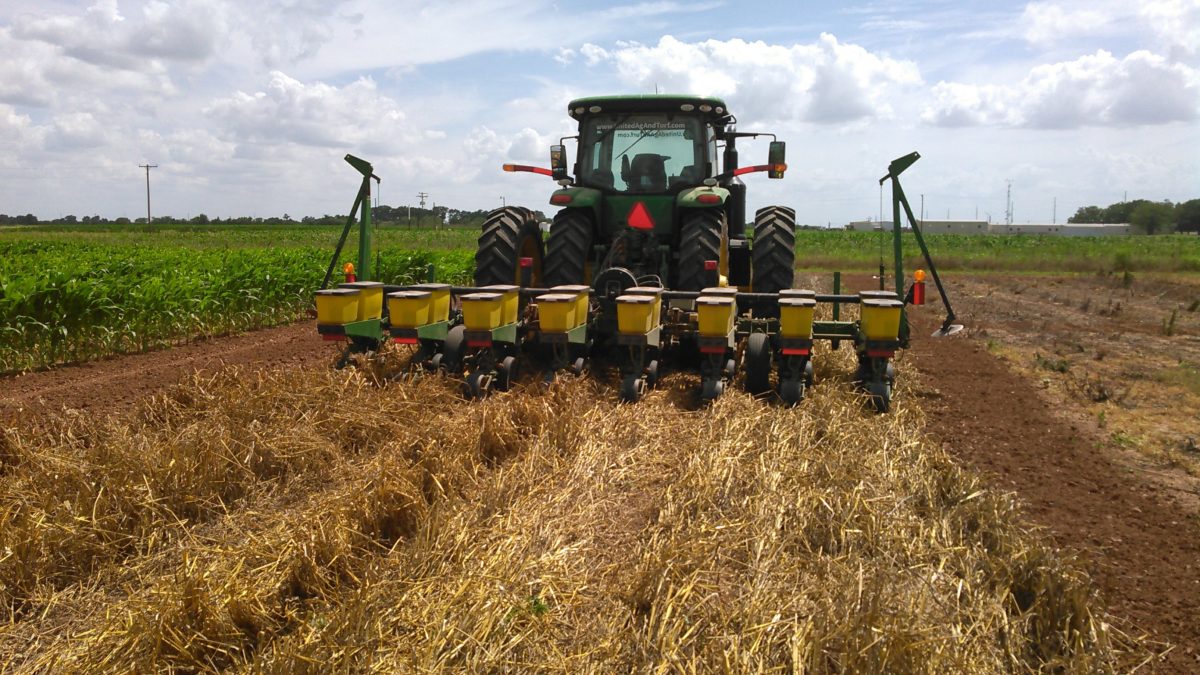 While it may take several growing seasons to see these improvements, leaving the cover crop in the field releases valuable nutrients back into the soil and increases organic matter within the topsoil.

Through the SSARE-funded research, Samuelson was able to identify cover crops with fast growth, high weed suppression and limited impact on soil moisture. This is a key step towards developing a sustainable cover cropping system for Southeast Texas.

His research recognized sorghum-sudangrass, sunn hemp, cowpea and buckwheat as summer cover crops with the most potential while triticale, oat, mustard and Austrian winter pea were the top winter cover crops.