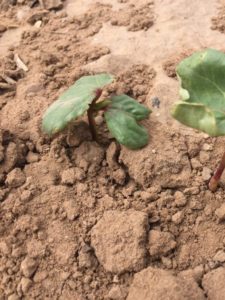 Cotton producers will begin putting fertilizer down in the next couple weeks and start planting in May. Many will be using new and improved cotton varieties but haven’t updated their fertilizing practices to match the new technology, according to a Texas A&M AgriLife Research study.

“I noticed we are constantly improving our genetics and the ability of our cotton varieties to adapt to abiotic and biotic stresses,” said Dr. Katie Lewis, AgriLife Research soil chemistry and fertility scientist, Lubbock. “But, we have not updated our recommendations on nutrient requirements and the use efficiency of modern cotton cultivars, so many practices are based on data collected in the late 1980s and early 1990s.”

Lewis said fertilizer applications have been adjusted to meet the yield potentials of modern varieties. She questioned why, if these varieties are more efficient, shouldn’t producers be able to reduce the amount of fertilizer applied.

She started a project with Dr. Glen Ritchie, a cotton physiologist who initially had a joint appointment with AgriLife Research and Texas Tech University, Lubbock, to evaluate total nutrient uptake in three different cultivars. The ongoing project is looking at the total amount of nutrients taken up and where the nutrients are stored within the plant.

“This research benefits from the expertise of several top cotton researchers in the state of Texas, providing insights from production systems in both the High Plains and Rolling Plains,” he said.

While evaluating the total nutrient uptake in three different cultivars, the team found there is more fertilizer taken up by the plant and partitioned into the seed — particularly with nitrogen and phosphorous. With greater nutrient uptake comes an increase in efficiency.

“Currently our soil testing lab recommends 45-50 pounds of nitrogen per bale per acre, and we think that could be lowered to 40-45 pounds that is required to produce a bale of cotton,” Lewis said. “We know there are other things to consider such as irrigation capacity, but this would definitely be a way for farmers to save money at the end of the day, if they are able to reduce the amount of nitrogen they are applying.”

She said the current cost of UAN-32 fertilizer is about 59 cents per pound, so at a reduced rate of 80 pounds per acre of nitrogen for a two-bale yield goal about $12 per acre or the equivalent of $1,200 per 100-acre field can be saved.

Lewis said it also looks like nitrogen is being taken up earlier in the season.

“We used to say all of our nitrogen needed to be out by peak bloom, but with our research, we think earlier is better, especially with a change in management strategies that might be using cover crops or no-till in the system — by pinhead square is the best time to have all nitrogen out,” she said.

Many modern cotton varieties are more water efficient, and this also increases the efficiency of fertilizers, Lewis said. Those varieties are better able to use the nutrients for greater biomass, lint and seed.

“Assumptions of nutrient availability or deficiency based only on prior fertilizer applications or crop yields almost certainly leave opportunity on the table,” he said. “Knowledge of actual soil nutrient status will be critical as we continue to build and begin implementing this improved understanding of nutrient-use among modern cultivars, particularly with environmental factors and varying tillage and cropping practices at play.”

DeLaune also said producers should not neglect the amount of nitrate in the groundwater.

“Research in the Texas Rolling Plains has shown that well water nitrate is available and fully utilized by cotton,” he said.

Making changes in the field

If producers are hesitant to make the suggested reduction in their fertilizer, Lewis said they might try it on a small number of acres the first year.

“There is likely a significant amount of residual nitrogen deeper in the soil profile,” Lewis said. “So even if their yield potentials do exceed the amount of nitrogen they apply in a given season, I feel confident the plants would be able to access residual nitrogen that was left from seasons before.

“We know they might see it as a huge act of faith, but we’ve been conducting this research for three years now and have consistently seen the same results of reduced requirements per bale.”

Lewis warned that producers also need to try whatever changes they make for multiple years to check if they see consistent results. They know reduced yields can also be due to wind, sand, high temperatures and other weather factors.

“When it comes to nitrogen management specifically, the environment plays a big role in what will be available to the plant,” she said. “The first factor is rainfall or precipitation patterns. A drier year means less nitrogen will be taken up. If we have one of our 5-10 inch rainfalls, that presents other conditions that can affect nitrogen availability – leaching or gaseous losses of nitrogen, meaning less is available to the plants.”

Kay Ledbetter is an associate editor/senior writer/media relations specialist for Texas A&M AgriLife. She may be reached at skledbetter@ag.tamu.edu.