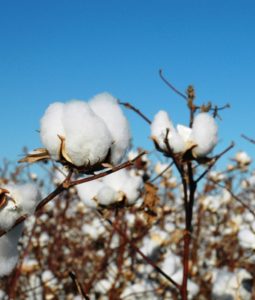 Producers in Texas’ Cotton Belt reported lower than expected yields as a result of a tough beginning, middle and end to the 2019 growing season, according to Texas A&M AgriLife Extension Service experts.

Dr. Jourdan Bell, AgriLife Extension agronomist, Amarillo, said the 2019 season started “rough” for cotton producers in the Panhandle. Extended rain and wet conditions delayed plantings, and many producers missed the deadline to have seeds in the ground.

“There was a reduction in planted acres due to planting delays by weather,” she said. “This far north, it’s important to hit the May window, and many producers didn’t this year.”

Spring rains preceded drought and high temperatures, which stressed cotton on dryland and limited irrigated fields, she said. Stressed plants dropped blooms and bolls, which reduced yields and led to quality problems. As a result, micronaire, an indication of the fiber fineness, were higher than preferred in some fields, which resulted in quality discounts.

“Essentially, there is too much plant for the boll load, resulting in thick fibers,” she said. “There’s a sweet spot when it comes to cotton. Too thin and it breaks, too thick you have knotting. If you have plants dropping half their bolls, they’re putting more energy into the remaining bolls and creating a thicker fiber.”

Fiber color grades were also poor, Bell said, due to exposure to late-season rain and snowfall.

Although per-acre yields were down compared to 2018, Bell said harvested Panhandle fields were still competitive with other cotton production regions, with average yields ranging from 500-1,800 pounds per acre.

Bell said the Panhandle experienced an early freeze that dipped into the teens for more than two hours. The low temperatures froze immature bolls shut. Some producers applied boll openers prior to the freeze, but the freeze likely caused some losses in up to 40% of fields in the region.

“Once bolls freeze shut, there’s no opening them,” she said. “Although only the upper, immature bolls were affected, this still resulted in a yield loss on many fields. The duration and severity of the freezing temperatures caught many growers off guard.”

Yields, as in the Panhandle, didn’t meet expectations due to drought and high temperatures, he said. Temperatures were above 90 degrees for 27 days in July and 29 days during August, while rainfall amounts for the months were 4.5 inches and 2.14 inches, respectively.

“While yields are definitely lower than expected by as much as 20%-30% in some cases, we cannot overlook the fact that many fields did not get any meaningful precipitation after crop establishment,” he said. “The heat, coupled with the lack of rainfall during peak crop water demand, made it clear why yields were lower than initial expectations.”

The weather even challenged irrigated fields as arid conditions created high evaporative water demand that made it difficult for pivots to keep up, she said.