Texas High Plains Crops Suffer After Too Much Moisture At Planting 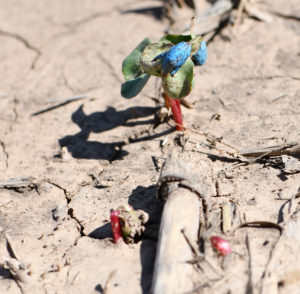 A seed coat remains on a delayed 3-week-old cotton seedling, while the establishment of a second plant was prevented as the leaves got caught up in the crusting process — Texas A&M AgriLife photo by Kay Ledbetter

While rainfall is important for crop production, the amounts falling across the High Plains have negatively impacted row crops and agricultural operations, with potential effects extending into the summer growing season, according to a Texas A&M AgriLife Extension Service expert.

Dr. Jourdan Bell, AgriLife Extension agronomist in Amarillo, says a significant amount of this year’s cotton has been affected by extensive rainfall during the month of May.

While crops all across the Texas High Plains have been affected, the northeast Panhandle has suffered to the largest degree, Bell says. There are reports of rainfall in excess of 15 inches on some fields in that region since May 1.

“We are receiving daily reports of unplanted cotton fields, fields of both cotton and corn that are failing due to saturated conditions, poor stands and poor vigor,” she says.

Bell says the growth in cotton infrastructure throughout the region in response to an expansion of cotton acreage in the past year or so will certainly be affected by the rainfall.

Planting stopped across most of the northern High Plains in the past two weeks for all commodities, so all crops are behind average, and some of the intended crops will not be planted. At this point, it is too late to plant cotton due to the narrow production window, which is restricted by insurance dates and the timing of the first fall freeze, she says.

“I had one producer tell me this will be more economically devastating than the drought of 2011.”

Another issue is many producers unable to get in fields to plant have already incurred expenses such as preplant fertilizer and herbicide costs, Bell says. The heavy rains may have now leached the fertilizer or washed the herbicide away.

“But even with concerns these inputs may have been lost in many cases, it’s not a guarantee,” she says. “Producers will need to be cautious about the plant-back intervals required for herbicides that were used with the original crop when determining their alternative crops.”

Also, soil crusting has occurred in some areas, magnifying germination issues and poor stand establishment, Bell says. Where the moisture permitted the crust to soften and allowed the seedlings to emerge and establish, growth has been slowed by abnormally cool conditions. And now, there are seedling diseases in many cotton fields.

Some corn fields planted in late April and early May during the break in rains have experienced extended periods of waterlogging, she says. Under extended saturated conditions, oxygen becomes depleted and the roots are not able to respire and take up water and nutrients. With root growth either slowed or stopped, these fields may be predisposed to more problems later in the season, such as nutrient deficiencies, water stress or even lodging.

And when the drying process does start, Bell says, if producers get in too big of a hurry and plant in overly wet fields, equipment can cause soil compaction. The planter’s furrow openers can cause compaction to the furrow side walls, which also restricts root development, resulting in symptoms of nutrient deficiency and water stress later in the season.

Even with wheat, which is almost ready for grain harvest, problems can occur due to the heavy and extended rains, she said. Precipitation at this time can enhance wheat test weights and yields, but extended amounts can prevent fields from drying down and cause some lodging.

“Also, producers who had contracts for wheat silage are not able to cut,” Bell says. “While they still have the opportunity to cut those wheat fields for grain, at current prices silage was a much more profitable option for many producers.”

Producers now are looking for secondary crop alternatives, she said. Some considerations are soybeans, grain sorghum, short-season corn and sunflowers. However, Bell cautions again that preplant herbicides will be an important consideration as producers make this decision.

While some situations are dire, she says not all is lost.

“On the brighter side of things, dryland acres that have not been planted will have a good soil moisture profile, and that will be very beneficial for late-planted grain sorghum and sunflowers,” Bell says.

“And, we are starting to see the first true leaves appear in some cotton fields, so hopefully over the next few weeks, with warmer and drier conditions, we will see cotton development progress where it was successfully planted.”