Texas Weather Pendulum Swings From One Extreme To The Other 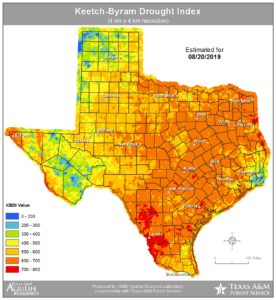 The KBDI attempts to measure the amount of precipitation needed to bring the top eight inches of soil back to saturation. Zero represents complete soil saturation, or no moisture deficiency, and 800 means it would take eight inches of precipitation to fully saturate the soil. Wildfire intensity begins to increase significantly after 400. Burn bans are routinely instituted in the 600-700 range. (Texas A&M Forest Service graphic)

Weather went from extremely wet to extremely hot and dry across most of Texas, according to the Texas State Climatologist.

Dr. John Nielsen-Gammon, College Station, said the weather turned from record-breaking rainfall in the spring to being among the driest and hottest summers on record. The jet stream migrated north, away from Texas, and tropical thunderstorms didn’t deliver in the summer months either, as temperatures continued a 1-2 degrees warmer long-term trend.

“A lot of the state picked up rain in June, after a very wet spring,” he said. “But then it started getting dry.”

A large swath of the state from the Lower Rio Grande Valley to Midland and Lubbock, the Hill Country up Interstate 35 to Dallas and much of East Texas has received less than 1 inch of rain since July 1, he said.

Some parts of the state, including around Beaumont and parts of the Panhandle, remained relatively wet, but Nielsen-Gammon said those areas are scattered.

“The monsoon season in West Texas was below normal with some parts receiving 2-3 inches, but it was spotty,” he said.

The state averaged 1.9 inches of rain total in July and August so far, which would make 2019 the third driest period behind 2000 and 2011 if no further rain fell, he said.

Nielsen-Gammon said the lack of moisture has allowed temperatures to climb.

“It’s been warm too,” he said. “The average temperature for the first 18 days of August has been the hottest on record for much of West Texas and some coastal areas. Temperatures have been in the top five hottest everywhere else except north central and northeast Texas.”

The drought monitor shows 22% of the state is in drought and 45% of Texas is abnormally dry, he said.

Texas A&M Forest Service Outdoor Burn Ban monitor showed 132 of 254 counties were prohibiting fires of any kind as of Aug. 20. The agency’s Keetch-Byram Drought Index, which measures drought and fire potential, has continued to climb around the state.

Nielsen-Gammon said some areas, including the Panhandle and parts of southwest Texas, have “opportunities for rain” in the near-future, but that he expects neutral weather conditions to persist into the fall.

“There are no indications of an El Niño or La Niña pattern, so it will be a flip of the coin on weather,” he said. “It shouldn’t be exceptionally dry or exceptionally wet.”